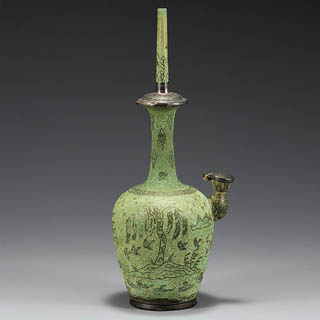 Widely regarded as one of the finest works of Goryeo metal craft, this Buddhist ritual vessel - known in Sanskrit as a kundika - has an elegant body that is 37.5 centimeters high and elaborately decorated with floral bands around the neck and foot.

It also features an idyllic waterside landscape with a hill of reeds and willow as well as several waterfowl, some floating in the water and others in the air, and a man rowing a boat.

The vessel is made of bronze, with the ornamentation done using the silver-inlaying technique, which saw great advancement during the Goryeo Dynasty (918-1392).

The vessel is characterized by a stable body proportion with fine curves. Goryeo artisans produced several bronze kundikas with silver-inlaid ornamentation, but this is regarded as one of the best among the masterpieces that have survived.