An set to lift European Rookie of the Year title

An set to lift European Rookie of the Year title 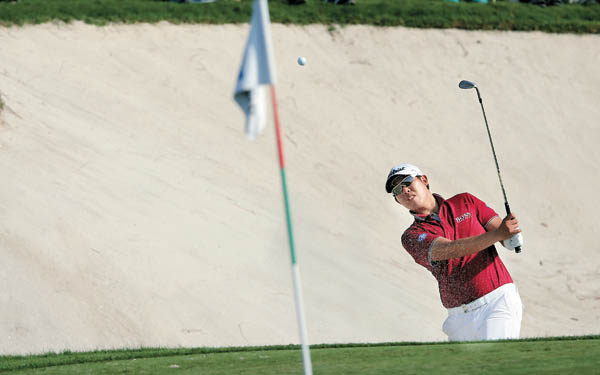 An Byeong-hun making a bunker shot during the third round of DP World Tour Championship golf tournament in Dubai, United Arab Emirates, on Saturday. [AP/NEWSIS]

An Byeong-hun is set to become the first Asian golfer to win the Rookie of the Year award on the European Tour.

An, 24, tied fourth at the season-ending DP World Tour Championship in Dubai on Sunday after finishing the event at 13-under 275.

World No. 3 Rory McIlroy won the event at 21-under 267, one stroke ahead of Andy Sullivan. The Northern Irishman also won the Race to Dubai title for the year, the third time he has secured the honor after 2012 and 2014.

An, who has already surpassed the prize money record for rookie golfers, is certain to win the Rookie of the Year award on the European Tour by finishing ahead of his closest challenger Matthew Fitzpatrick of England in the Race to Dubai, which translates prize money to ranking points.

An is 7th in the Race to Dubai standings, five ahead of Fitzpatrick.

The Rookie of the Year, which is selected by the PGA European Tour, the Royal and Ancient Golf Club of St Andrews and the Association of Golf Writers, is usually given to the first-year golfer who has earned the most prize money.

An has been under the spotlight after he became the youngest-ever winner of the 2009 U.S. Amateur at the age of 17. He turned pro in 2011, but stayed in the second-tier Challenge Tour for three years before joining the first-tier European Tour.

With a victory in the BMW PGA Championship in May for his first tour win, he had six other top 10s in the European Tour this season.

An, the son of Olympic table tennis medalists Ahn Jae-hyung and Jiao Zhimin, started the season ranked No. 180 in the world, but his ranking has been gradually going up and is now at No. 39, the best among Korean male golfers.

An has been focusing on improving his putting for this season as well as his long range drive. In the middle of the season, he changed his putter from a blade-type putter to mallet putter and has seen improvement.

His average putt per round was 29.21, but during the four Final Series in the European Tour, he posted average putts of 27.8, and finished fourth, tied 19th, tied third and tied fourth in last four events.

“In the past, he was nervous when he was going to make a putt, but recently he makes trustworthy putts,” said An’s father Ahn Jae-hyung who previously worked as his son’s caddie. “But in order to become a top class world player, he also needs to make a putt that is five or six meters from the hole.”

An, who also won the Shinhan Donghae Open in Korea in September, has earned 2.41 million euros after playing in 26 events in the European Tour.

No Korean male golfer has earned more this year.

“The Rookie of the Year award will be the result that can represent my achievements this season,” An said.