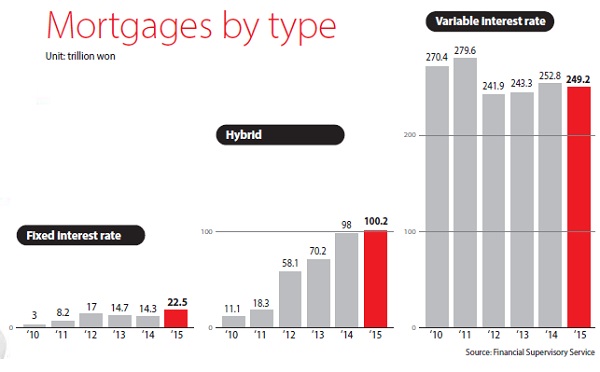 After five years, the interest rate becomes variable. Even though he has two years left of the fixed rate, Kim is already worrying about the U.S. Federal Reserve raising interest rates, which it may do as soon as a meeting next month.

“I took out the loan [three years ago] because the bank told me it was virtually the same as a fixed interest rate mortgage,” Kim said. “But it won’t be starting in 2017. I’m worried about how fast interest rates will go up - and how much I will have to pay every month.”

Banks in Korea are already raising interest rates on loans ahead of the U.S. central bank’s decision. 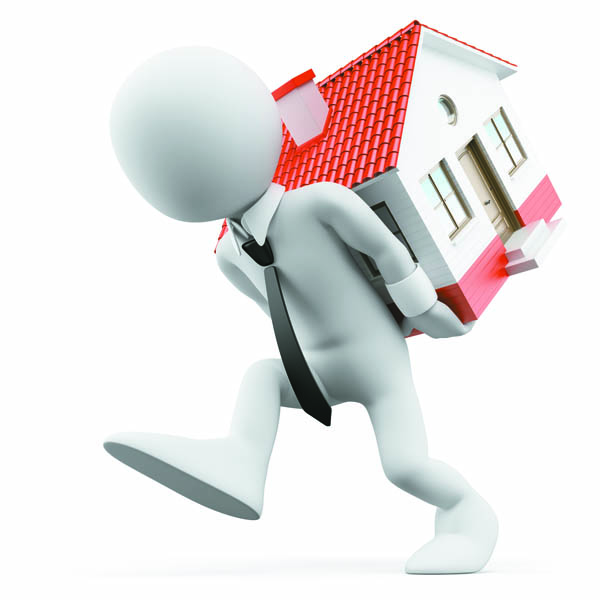 Commercial banks’ annual interest rates on mortgages in September were between 2.84 percent and 3.08 percent. That was a 0.2 percentage point increase from July’s range of 2.63 percent and 2.79 percent.

The sharp increase was largely the result of the government encouraging borrowers to take out loans on fixed interest rates in recent years.

The government set a target of increasing mortgages borrowed on fixed interest rates to 30 percent of the total in the following five years. This was in response to worries about the record breaking growth in household loans. As of the first half of this year, household debt in Korea including credit card debt was at an all-time high of 1,130 trillion won. The figure for the third quarter will be announced today by the Bank of Korea.

BOK Governor Lee Ju-yeol last week raised renewed concerns over the ever growing debt. At a CEO forum held by the Korea Chamber of Commerce and Industry, Lee issued a warning on the debt.

“One of the biggest risks that the emerging markets are carrying is excessive debt in the private sector,” Lee said. “When looking at past financial crises, there always were excessive supplies of debt.

“When interest rate go up, the burden of repaying the accumulated household debt goes up, which will worsen the financial sector’s soundness and delay economic recovery.”

However, when trying to persuade borrowers to convert to fixed interest rate loans nearly five years ago, the government was faced with criticism that not many would follow because interest rates were being kept low to stimulate the economy in the wake of the 2008 global financial meltdown.

The central bank lowered Korea’s key interest rate to a historic low of 1.5 percent, and some people who took out loans on fixed interest rates felt as if they were duped. The property market, which has been showing strength since late last year, is losing steam, partly over concerns about rising interest rates.

According to the Ministry of Land, Infrastructure and Transport, housing prices rose 0.64 percent in April compared to the previous month. In August, the acceleration dropped to 0.35 percent and only improved slightly to 0.44 percent in September.

“The hybrid mortgages only add to risks according to the movement of interest rates and the financial authority has to create a safety net,” said Lee Jae-yeon, senior researcher at Korea Institute of Finance.