Kim mourned across the nation

Kim mourned across the nation 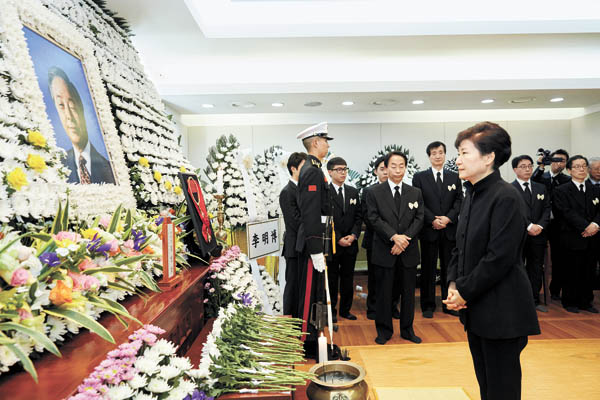 President Park Geun-hye paid a visit on Monday to the mourning altar of former President Kim Young-sam, who died early Sunday at the age of 87 from a severe blood infection and acute heart failure.

Park, in black attire, bowed her head in front of Kim’s portrait at the altar set up at Seoul National University Hospital at 2 p.m. on Monday. Park then went to a family reception room to deliver her condolences to Son Myung-soon, widow of the late Kim, who greeted the president from a chair. Park held Son’s hands while expressing her condolences, and Son, 87, listened without saying a word.

Park, who returned to Korea hours before from a 10-day overseas trip, stayed at the altar for about eight minutes and left without giving any comments to the press. It was her first official activity following her return eight hours before.

Park’s visit to the altar was significant considering the tangled history between her family and the late Kim. It was Park’s father, military strongman Park Chung Hee, against whom Kim led an anti-dictatorship, pro-democracy movement in the 1970s. In September 1979, Kim gave an interview to The New York Times, in which he demanded Washington halt aid to South Korea until Park accepted democracy. Kim’s interview provoked the ire of the Park government, which moved to expel Kim from the National Assembly. Less than a month after Kim’s expulsion, Park was assassinated by his longtime aide Kim Jae-gyu.

Kim was critical of the daughter of the former dictator running for president. When Park Geun-hye ran for the party’s presidential nomination in 2012, Kim called her “chilpuni,” a reference to an infant born in the seventh month of pregnancy, implying that she was not qualified. He also noted that the presidency should not be occupied by the daughter of a dictator, saying it was the equivalent of “going against the flow of history.”

While the two former presidents fought together against the military governments of Park Chung Hee and Chun Doo Hwan in the 1970s and 80s, the two later became bitter rivals contending for the highest office. Kim Dae-jung succeeded Kim Young-sam in 1998 as president.

Kim Young-sam once described his relationship with his successor as a “love-hate relationship” that was “special and unprecedented.”

With the passing of the two Kims, only two-time Prime Minister Kim Jong-pil remains of a trio known as the Three Kims, who shaped the South Korean political landscape for decades.

A steady stream of politicians from both sides of the political divide flocked to Kim’s altar in a rare display of bipartisan spirit. As of 6 p.m. Monday, nearly 10,000 paid their respects at the SNU hospital altar. They formed a group portrait of South Korea’s political landscape of the past 60 years.

Lee Hoi-chang, a former prime minister in Kim Young-sam’s government - who himself unsuccessfully ran for president three times - said the late Kim was like “a big mountain.”

“We take democracy for granted, like water and air, because we are so accustomed to it,” Lee said after paying his respects on Monday. “But it was only possible thanks to people like President Kim.” Lee’s own relationship with Kim was strained when he distanced himself from him in his 1997 bid for the presidency.

A list of the funeral committee members is expected to include former politicians and activists who supported both Kim and his former rival Kim Dae-jung.

Saenuri Chairman Kim Moo-sung continued to greet guests on the second day of Kim’s memorial along with Kim Hyun-chul, second son of the late Kim. The ruling party leader’s gratitude to Kim was displayed on Sunday, when he said he was “the political son” of Kim.

Kim Moo-sung is expected to run in 2017 to succeed President Park.

Opposition leader Moon Jae-in of the New Politics Alliance for Democracy also noted his special relationship with Kim, saying he went to the same middle and high schools as Kim in South Gyeongsang.

“Kim’s biggest achievement was putting an end to the military dictatorship. He was a big mountain for our democracy and charted a new path for a democratic government through his administration,” Moon said.

A mourning altar for Kim was also set up at the National Assembly on Monday, along with other altars erected by regional governments throughout the country, all of which will be open until Kim’s burial at Seoul National Cemetery in Dongjak District on Thursday.

A state funeral for Kim will be held at 2 p.m. on Thursday after a five-day mourning period.

According to feng shui expert Hwang Young-woong, the grave sites of the two Kims are located as if they are two wing tips of a peacock in the theory of feng shui.