Lotus aims to blossom in Korea with changes

Lotus aims to blossom in Korea with changes 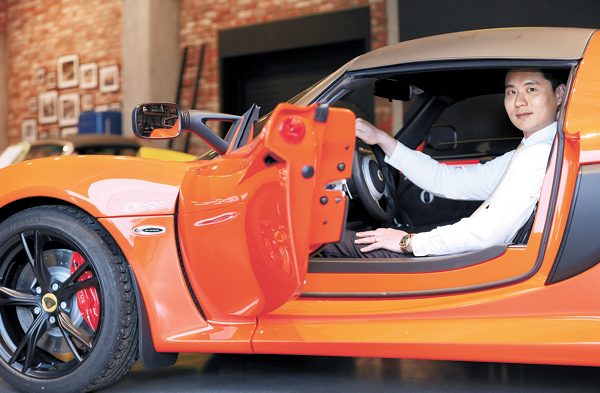 The famous British boutique sports car brand Lotus is revamping its marketing strategy in Korea as it rolls out the new, fully automatic Exige S.

Earlier models sold in Korea have had trouble attracting consumers largely because of their manual transmissions.

Lee Hyuk, the 36-year-old CEO of Lotus Korea, said the biggest draw of the Exige S is its driving performance. New cars are usually unveiled in showrooms in Seoul, but Lee said he opted to hold the car’s release event in Gwacheon, Gyeonggi, because it offered the best road conditions.

“We wanted potential buyers to get a feel for how a Lotus really performs,” he said.

Lotus is known for its lightweight, speedy cars that were popular racing models in the 1960s and ’70s because of how balanced their bodies were.

The brand’s designs were also admired by filmmakers, who featured them in everything from the James Bond flick “The Spy Who Loved Me” (1977) to “Pretty Woman” (1990).

More recently, a Lotus could be spotted in “Boys Over Flowers,” a popular Korean drama from 2009.

But despite the media exposure, Lotus hasn’t been a popular brand for Korean consumers. Most of its models are manual, whereas Koreans tend to prefer automatic transmissions, and the designs of many models have been called too sporty.

“Our marketing goal is to promote the vehicle as having the performance of a Ferrari with the sticker price of a Porsche,” Lee said.

Lotus Korea plans to expand its lineup of automatic offerings by introducing the Evora 400 in February 2016. The revamped model boasts improved parts and 70 percent better driving performance compared to the predecessor Evora S.

In addition to its lineup, the brand is also expanding its number of showrooms and service centers in Korea.

Lotus Korea currently has only one service center in Seoul. But next year, it plans to set up service centers in seven major cities, including Busan and Incheon. It will also add new showrooms.

The brand’s new marketing strategy focuses not only on the performance of Lotus cars, but also their customizable features that help buyers give their models some distinct flavor.

All the models are made by hand, which means the buyer can etch their initials on the body or change the stitching in the interior. If the buyer wants, he or she can also watch their car being built at the Lotus production plant in Hethel, United Kingdom.

He added that while the model is competing in price against Porsche’s Boxster and GTS models, its performance is up there with a Ferrari or Lamborghini. “But Lotus has strong characteristics, and unlike other luxury brands, it has the advantage in driving performance, which puts it in a category of its own,” Lee said.