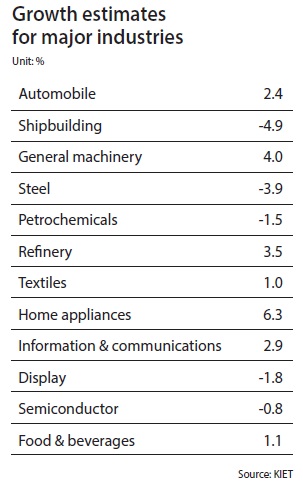 Exports might improve slightly next year, helping the overall economy grow, but China will be a big risk for Korean industries, a report by a state-run research institute said on Wednesday.

The Korea Institute for Industrial Economics and Trade projected a 2.1 percent increase in the country’s total exports in 2016 and a 3 percent growth in GDP in its report.

The aggregate export volume is estimated to record $543.6 billion next year, while imports would post $457.5 billion, the report said. The trade balance is predicted to produce an $86.1 billion surplus, which is lower than the institute’s forecast of $88.3 billion for this year.

“Global trade is expected to recover slightly, and unit price falls are likely to slow,” the institute said. “The GDP is expected to rise 3 percent compared to this year, but the growth would be slow in general due to the sluggish consumption propensity in the long run.”

“However, expected U.S. interest rate hikes and the Chinese economic slowdown are going to be key variables that will affect our economy,” the report said.

Export growth will be led by the home appliance, general machine and automobile sectors, the institute projected. In particular, Korean home appliances are likely to benefit from the Rio Olympics in 2016, rising 6.3 percent compared to this year.

As demand for automobiles and eco-friendly machinery is increasing in advanced countries, exports of Korean vehicles and general machines are estimated to rise 2.4 percent and 4 percent, respectively. Communication devices, including parts for smartphones, are expected to grow 2.9 percent.

Petrochemical and refinery sectors that took a big blow from oil price falls this year are likely to see their exports recover next year.

International oil prices, however, are projected to remain low due to the prolonged economic downturn across the globe. The average price is estimated to be $55.1 per barrel, up 5.7 percent from this year.

But the institute is concerned about the sluggish recovery of the shipbuilding industry, while showing new worries about an expected slowdown in the semiconductor industry as well.

Steel exports are forecast to drop 3.9 percent largely because of the Chinese slowdown and expanding protectionist moves around the world. The shipbuilding sector is expected to remain as poor as this year, posting minus 4.9 percent in exports next year, the report said.

Due to falls in the price of dynamic random access memory (DRAM), the semiconductor sector is predicted to see a drop in exports. Display exports will fall 1.8 percent.

“The Chinese slowdown is forecast to have a negative impact on the country’s exports to China, especially on machinery, textiles, refinery, steel and home appliances,” the institute said. “The fact that China is focusing on increasing the competitiveness of its major industries might also be no help for the Korean exports.”

Meanwhile, Bank of Korea Gov. Lee Ju-yeol said on Wednesday at a conference on economic trends that Korean industries should be more aware of the narrowing gap between Korean and Chinese companies in terms of technological prowess, rather than the Chinese economic slowdown.

“Many experts are focused on decreasing demand in China as its economic growth slows,” Lee said. “But what we should pay attention to is that Chinese industries are increasingly becoming competitive.”

Lee expressed concern that competition between Korean and Chinese exporters is intensifying in the global market. “I think it is going to be a big challenge for Korea that the gap between Chinese and Korean companies is narrowing,” Lee added.