Cultural exchange between Korea and China in the entertainment business has been fast increasing over the past few years.

Since the early 2000s, collaborations between the two Northeast Asian countries have been spotted on TV and web dramas and even reality shows, through the sharing and exchanging of program formats, shooting locations, budgets and talents.

However, the most vibrant and fruitful field of this year has arguably been the film sector.

The active collaboration was most evident at this year’s Busan International Film Festival (BIFF) last month, where meaningful achievements by the two countries’ film industries were announced.

One of these was the establishment of Huace & NEW, a joint venture between Korea’s leading film distributor, Next Entertainment World (NEW), and China’s Huace Media Group. Each company holds a 50 percent share in the venture. 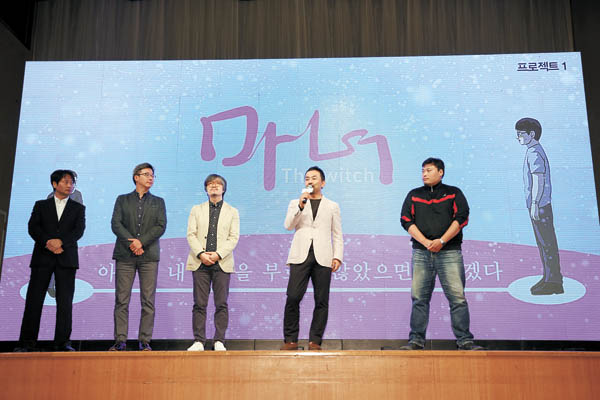 A film adaptation of Kang Full’s webtoon “The Witch” is one of the three projects that Korean-Chinese joint venture Huace & NEW will collaborate on in the coming years. [NEXT ENTERTAINMENT WORLD]

The big news was followed by the presentation of three new projects the international joint venture will collaborate on in the coming years: “The Witch,” based on Kang Full’s eponymous webtoon, will be separately adapted into Korean and Chinese films, and Korean films “The Beauty Inside” and “The Phone” will be remade for the Chinese market.

Furthermore, Beijing-based production company Hairun Pictures said it will release six Korean-Chinese movies, including “Tik Tok,” which is currently in production and stars Korean actor Lee Jung-jae and Hong Kong actor Wallace Chung. It is reported to be a mystery-action flick.

The unprecedented number of collaborative projects this year offer many opportunities to the industries of both countries. And they mark a turning point in the two parties’ approach to such partnerships, as they have gone beyond just borrowing talents and buying the rights to existing and toward closer collaboration. 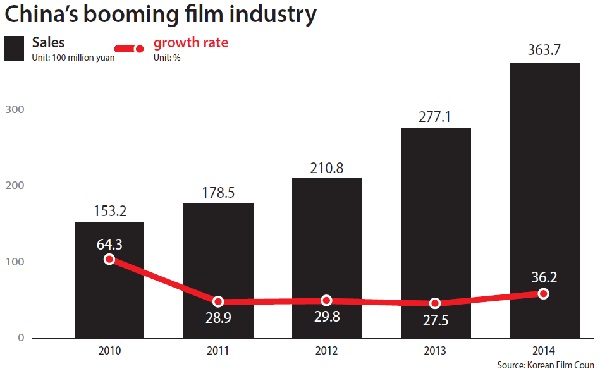 Although the country started off far behind in the international film scene, it has quickly caught up, recording a 40 percent growth rate in the year of 2009 and maintaining an average growth rate of 30 percent ever since.

China is now the second-largest film market after the United States.

“China is soon going to be the biggest film market in the world,” said Cong Wang, a chief strategy officer of Huace Media Group, at a conference on Nov. 17 in Seoul.

“In the past 15 years, the industry size has expanded by 50 times. Now, we have 15 screens per 1 million audience members, which means we still have a lot more room to grow,” he added.

Considering the growth rate of the Korean film industry, which has barely achieved 10 percent for the past several years, China is surely an attractive destination. 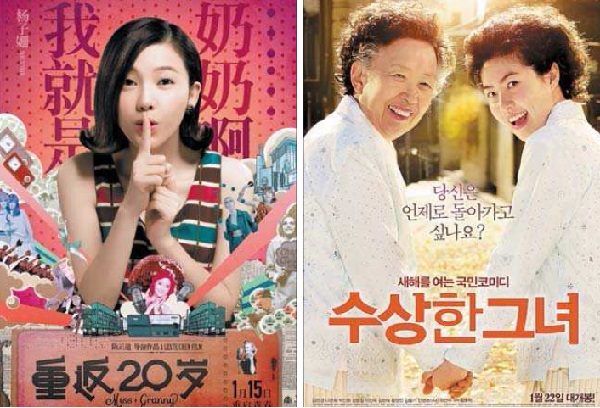 The Chinese adaptation of the Korean box-office hit “Miss Granny” (right), titled “20, Once Again!” (left), set the record as the highest-grossing Korean-Chinese co-produced film of all time. [CJ ENTERTAINMENT]

Also, in the Chinese film market with its strict quota for foreign films - currently occupied mostly by Hollywood blockbusters - co-productions can get around the regulations since they are considered domestic films.

“Korean films are developing, but the size of the domestic market hasn’t,” Park Eun from CJ E&M’s production and distribution division in China, told the Korea JoongAng Daily.

“Korean audiences are already seeing a lot of movies per year,” she added. “Our demand for a larger market was a timely fit with the rapidly growing Chinese market.”

However, expanding beyond Korea’s oversaturated market is not the only motivation for collaboration.

Chinese firms, too, are benefiting from working with the Korean teams.

Left: Korean fantasy-thriller “The Phone” will be adapted for Chinese audiences by the newly established joint venture Huace & NEW. Right: A mystery-thriller titled “The Peaceful Island,” directed by Korea’s Chang Yoon-hyun and starring a mix of Taiwanese and Chinese actors, is slated to be released by CJ Entertainment next year. [CJ ENTERTAINMENT, NEXT WORLD ENTERTAINMENT]

In order to compensate for the lack of infrastructure and human resources, which failed to keep up with the explosive growth, China’s film industry has been receiving a helping hand from Korean filmmakers, technology and intellectual property.

A representative case is the 2013 Korean-Chinese CGI-heavy film “Mr. Go,” with its computer-generated gorilla protagonist. Korean visual effects company Dexter Film handled the computer graphics and the film was then distributed in Korea and China simultaneously.


How it all started

The first generation of Korean-Chinese films were born in the early 2000s.

Since the collaboration was sporadic, it is not clear what the first such film actually was.

However, according to records, “The Anarchists” (2000) starring Jang Dong-gun is one of the earliest joint projects.

It was produced by Korean production company Cine World and received production support from Shanghai Film Studio for its location, but not much more. Another example is “My Wife is a Gangster 3” (2006), which was a Chinese remake of a Korean movie and directed by the original filmmaker, Jo Jin-kyu.

The collaboration became more advanced with “Sophie’s Revenge,” which was co-financed by China’s Beijing Perfect World and Korea’s CJ Entertainment in 2009. The film was written and directed by Chinese filmmaker Yimeng Jin and starred a mix of Korean and Chinese actors including So Ji-sub and Zhang Ziyi.

CJ Entertainment gave it another try in 2013 with “Wedding Invitation,” a remake of the 2009 Korean tear-jerker “Last Present.” The result was a success: The film grossed more than $30 million in Chinese theaters, which was an unprecedented feat for a Korean-Chinese co-produced film. It was helmed by Oh Ki-wan, the original film’s director, and starred a slew of Chinese actors.

Then in 2014, another film broke that record when the Korean box-office hit “Miss Granny,” about an old lady who wakes up one day in a 20-something-year-old body was adapted for the Chinese market, financed by CJ Entertainment, Huace Media Group and others.

Under the title “20, Once Again!” the Chinese version, directed by Leste Chen and starring an all-Chinese cast, grossed some $60 million, making it the most successful film in this category.

On the back of its popularity, the film is slated to be made in to a drama series in China as well.

Although it is still in their infancy, Korean-Chinese co-productions have made significant progress in a decade.

And CJ Entertainment, the leading player in the field, emphasizes the importance of content.

“When analyzing what led to the success of ‘Miss Granny,’ there is only one answer, and that is the story,” said Jeong Tae-sung, head of CJ Entertainment’s film division, at a BIFF forum that was held for the first time this year to promote further collaboration between the countries’ film industries.

“Even if we release a Korean film abroad, it still is a nonmainstream movie,” he continued. “So in order to overcome that, we needed to emphasize our planning ability. Aiming for a simultaneous release in the overseas market, we localized the screenplay to each country from the preproduction process, which is what differentiates it from a mere remake.”

A prime example of this approach is the aforementioned “Wedding Invitation.” Aside from the central plot of a woman suffering from a terminal illness and a man who loves her, the film doesn’t much resemble the Korean original.

“The story revolves around a married couple in the original film. However in China, most of the theatergoers are in their 20s. So we needed to change the married protagonists to a young couple,” Park from CJ Entertainment explained.

“In the case of ’20, Once Again!’ the main theme of reminiscing about the old days is quite universal, so we emphasized that according to the Chinese sentiment,” she added.

NEW, which is just beginning to set foot into the area, also emphasized the importance of content for its upcoming projects.

“Localizing the screenplay to their culture is the prime issue for us right now,” said Yang Ji-hye, the head of the company’s public relations team. “Among our newest releases, we picked screenplays that would be fresh and fun to Chinese audiences.”

In the near future, CJ Entertainment is looking forward to introducing a new genre to the Chinese market, which has been mostly centered on family dramas and romantic comedies.

Early next year, the much-delayed Korean-Chinese-Hong-Kong project “The Peaceful Island” will finally be released. The film, directed by Chang Yoon-hyun, is a mystery-thriller about a team of ocean surveyors who crash-land on a remote island.

According to Park, CJ Entertainment is planning to start five more co-produced projects, including fantasy-comedy “A Man in Labor” (working title), directed by Kim Ji-hoon of “Tower” (2012), which centers on a male detective who becomes pregnant.

Meanwhile, with the continuing exchange of capital and talent, some industry insiders are concerned about the possibility of the Korean film industry using up all its resources on the Chinese market. Because if the Chinese industry advances further, it will no longer need to collaborate with Korea, and may instead turn toward Hollywood.

But Park says it is “premature” to worry about that yet, for she believes such know-how is only acquired through years of experience.

“What is more challenging is adapting to the different structure and system of the industry,” she said. “Unlike Korea, films go through a strict preliminary review in China, especially when it is a co-produced film. We feel sorry when the most authentic and edgy part of the screenplay gets censored out.”