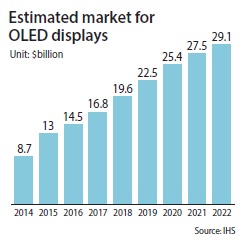 LG Display, a leading supplier for Apple, will spend more than 10 trillion won ($8.7 billion) on building a new plant and expanding production of a newer type of display that can be used to cut power use, make thinner devices and show brighter colors.

It will invest 1.84 trillion won for the construction alone, the company said Friday.

The investment is the latest in a series of efforts by LG to pull together resources for the development of OLEDs, which are thinner and more flexible than conventional panels like plasmas and LCDs.

The world’s largest OLED manufacturer said that the facility in Paju, Gyeonggi, will produce OLED displays for various smartphone and television models and include forward-looking products, such as flexible and transparent OLEDs. The plant, dubbed P10, will start operations in the first half of 2018.

The spending is a part of a long-term investment plan that was announced in August. At the time, LG Display said that more than 10 trillion won will be spent on developing OLEDs and premium LCD panels by 2018.

The scale of the investment could be even greater given that LG Display expects the new Paju plant to require some 10 trillion won in investment just to install equipment.

“The investment announced today [1.84 trillion won] will primarily go toward constructing the facility,” said Hyun Dong-hoon, a public relations worker at LG Display. “But the plant would need 10 trillion won total in the coming years to install the required setups - clean rooms and other facilities - to operate and maintain the OLED factory,” he said.

The construction, the manufacturer said, is intended to meet growing demand for next-generation displays.

“In the next two to three years, the demand for OLED panels will grow significantly,” the company said in a statement.

The decision follows reports that Apple has decided to adopt OLED display for its future high-end smartphones.

Multiple local media outlets speculated that the new plant will be primarily responsible for producing the smartphone panels for Apple’s iPhones. The company declined to comment, saying that its decision had been made long before. The government has formed a task force to facilitate administrative measures regarding the construction of the new plant.

Han Sang-beom, who heads LG Display, said that the sizeable investment and more production lines will reinforce LG’s position as the No. 1 OLED manufacturer.

“This is a historic investment aimed at advancing Korea’s status in the OLED business and beating out other manufacturers,” Han said.

LG Display has become an unrivaled OLED panel manufacturer as competing businesses have either phased out or scaled down OLED production due to the high costs involved.

Until 2013, Samsung was bullish on OLEDs, but it has since stepped back from the next-generation panel citing a lack of demand and high manufacturing costs. But earlier this year, LG Display invested 1.05 trillion won ($908 million) to build a new local plastic OLED display production plant after it established a separate division in January devoted to OLEDs.