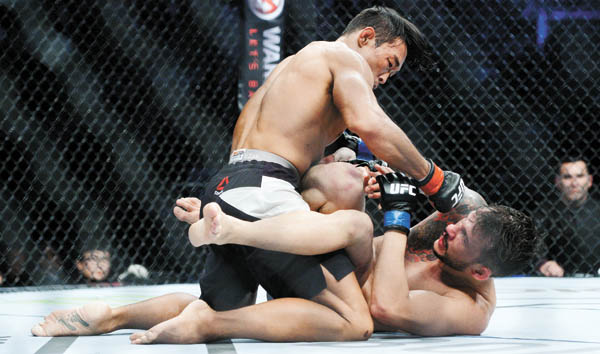 Despite a few last-minute changes and some mixed performances from Korean fighters, the first-ever Ultimate Fighting Championship (UFC) event held on the peninsula wrapped up successfully on Saturday night.

UFC Fight Night Seoul at the Olympic Park Gymnastics Arena drew total of 12,156 fans on Saturday, according to the UFC. The crowd wasn’t enough to pack the 15,000-seat gymnasium, but Kenneth Berger, UFC executive vice president and general manager of the Asia division, described the event as an overall win, hinting that another fight could land in Korea as early as next year.

“The UFC has already had successful events in countries like Korea, the Philippines and Japan,” he said. “Tokyo, Osaka, Seoul and Hong Kong are also possible cities to host event next year.”

Cheered by home fans, Korean fighters said they enjoyed the bouts more than any other time, despite posting mixed results.

Kim Dong-hyun, nicknamed “Stun Gun,” posted his 21st mixed martial arts victory by defeating American fighter Dominic Waters by TKO in the first round of their welterweight bout. Kim, 33, said that there was little pressure because everyone thought that he had an easy opponent, but he was still happy to produce a win.

“There were a few dangerous moments but the cheers from home fans gave me the strength to avoid them,” Choi said. “The victory feels amazing and it feels like the hard work paid off.”

Korea’s first female UFC fighter Ham Seo-hee collected her first win in the octagon after beating Courtney Casey with a unanimous decision in the strawweight division. Ham, 28, also collected $50,000 after she was awarded “Fight of the Night.”

“Finally, what I wished for has finally come true,” she said. “It especially feels great since this is the first UFC fight in Korea.”

In the middleweight division, Yang Dong-I made successful comeback to the UFC after a three-year hiatus by beating Jake Collier by a TKO in the second round, while Bang Tae-hyun won against Leo Kuntz in the lightweight bout with a 2-1 split decision.

But not all the Korean fighters were smiling.

Kim Dong-hyun, nicknamed “Maestro,” lost to Dominique Steele by TKO in the third round, suffering a painful defeat in his UFC debut. Nam Yui-chul was defeated to Mike De La Torre in a 2-1 split decision.

This was the second straight win for Henderson after he moved up to welterweight. The 32-year-old, whose nickname is “Smooth,” now has 23-5 MMA record.

“I had a good fight and I’m thankful I got my hand raised,” he said. “The hardcore fans know how tough Jorge is.”

But 40-year-old Korean-Japanese fighter Choo Sung-hoon (Yoshihiro Akiyama) picked up a painful defeat in split decision against Brazilian Alberto Mina in their welterweight fight. Mina, 33, kept his undefeated MMA record to 12, while Choo picked up his sixth loss.

Choo, who is a well-known celebrity in Korea for his appearances on entertainment shows with his daughter, was fighting for the first time since September 2014, when he beat Amir Sadollah. The former judoka nearly lost the bout in the second round after a brutal flurry of punches from Mina. He tried to turn the tide in the third round, but it was too late.

“After I was knocked out in the second round, I thought this was maybe the end, but I was able to wake up with the support from Korean fans,” Choo said.