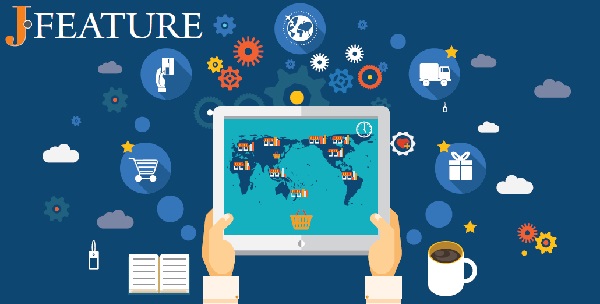 It was a never-ending frustration for one stylish Chinese girl in her 20s: getting hold of the styles she liked best from Korea. There were some styles she simply had to have, like the dress worn by her favorite Korean actress in movies and TV shows. Sometimes she favored something more tomboyish, like an oversized shirt, or something more girly, like fringe at the end of a skirt. It was never easy to find the designs she liked locally. She continued looking for acquaintances traveling to Korea and asked them to bring items back for her. That was a hassle for her, and her friends didn’t like it much, either.

Those frustrations are coming to an end as more Korean websites have started to ship abroad. China is a particularly lucrative market. The Chinese K-fashion fan is happier than ever with her online shopping recently, as websites have started to offer some features in her native tongue so she can have a much easier time finding the products she wants.

Another girl in Kazakhstan who loves to shop for styles popular in Korea is also thrilled about the fact that she can not only get her purchases shipped directly to her, but also return or exchange items in case a purchase goes wrong.

These are some true customer stories told by online shopping mall owners as the volume of exports grows. Smaller online shopping sites have joined the new world of commerce. 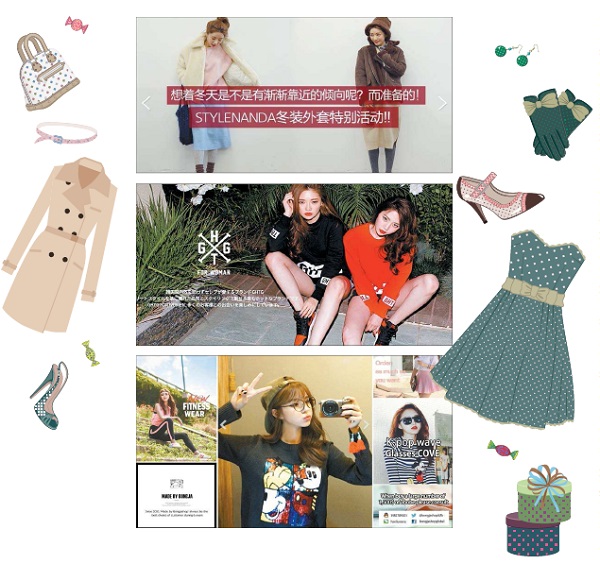 Many small fashion websites have implemented Chinese, Japanese and English services for the convenience of shoppers overseas. [SCREEN CAPTURE]

Unique styles of clothing and accessories made or sold by smaller online retailers are becoming more popular among shoppers outside of Korea. To cater better to those new-found customers, retailers have been customizing their websites with different languages, including Japanese and Chinese, and offering tips on how to mix and match outfits with accessories, illustrated with photos of models.

Just as boutique, no-name designer stores once competed with big-name retailers and department stores in Korea’s brick-and-mortar retail industry, the online fashion world is seeing some of the same kind of competition. Smaller vendors targeting a special customer base with their own unique styles, such as girly or hipster looks that are sought after by certain types of customers.

“Koreans here may not notice that there is a trend called ‘Korean style,’” said Choe Hyon-ho, president of fashion consulting company MPI. “But in foreigners’ eyes, people in Korea seem to be more well-dressed, reflecting fast-changing trends.”

The different styles of popular Korean celebrities have been a major force boosting this trend.

“Especially among young people in other countries, they brag among themselves about how they include parts of the Korean lifestyle in their daily lives by wearing clothes made in Korea and frequently shopping for those items,” Choe said. “Many seem to think that incorporating Korean products into their lives is superior to merely having visited the country.”

Thanks to this new hotness of Korean-style clothing, exports from online shopping hit $18.3 million from September 2014 to the end of August, a 232.3 percent increase from the period a year earlier, according to the Korea Customs Office last month.

Clothing took up 51.9 percent of all exports, cosmetic products accounted for 20.5 percent and other fashion accessories made up 11.6 percent. Among 164 countries Korea exported to, China took up the most at 42.2 percent.

Most of the popular websites are not involved with large companies or well-known designer labels. They are run by individuals or small groups of people that either make their own clothing and fashion items or purchase them and sell them under their own labels.

StyleNanda is one of the most well-received fashion companies, which first launched its online outlet in 2004. After it became recognized among local shoppers here in Korea, it started to sponsor many TV dramas, including the KBS drama “The Producers.” Popular TV stars such as singer IU and actress Gong Hyo-jin wear its products on their shows.

Kim So-hee, CEO of the company, told the JoongAng Ilbo earlier this year that she runs a separate overseas sales team. She started to see more global sales after her products became hot items among Hallyu fans, or followers of the so-called Korean Wave of popular culture including films, TV shows, music and fashion.

Currently, the company offers shipping to over 100 countries, including Italy and Norway and some African countries such as Ghana and South Africa. The countries that place the most orders for overseas shipping include Australia, Canada, the United States, China, Malaysia and Singapore. The website is currently translated into three languages: English, Chinese and Japanese. That is increasingly being done by online shopping malls.

“These websites have sales power with low selling prices on top of good quality and style of their garments,” said Han Mi-kyung, a manager of the Korea Research Institute of Fashion Industry. Some Chinese customers think Korean products are the best, he said.

The forte of StyleNanda’s website is its diversified portfolio. It launched the cosmetic label 3CE in 2009, and the selection of colors has appealed to shoppers, especially in China, industry experts say. The brand name the company established for its clothing lines helped boost the cosmetics business both here and overseas.

“The clothing company actively used social media networks after it launched its cosmetic brand,” said Lee Si-hwan, manager of the Marketing Strategy Research Institute for Cafe24, a shopping mall platform and service provider, during a presentation at a meeting of small and midsize companies’ CEOs earlier this month, according to local reports.

“To make better online sales, [the company or the products] need to be well-known in Korea as well, and [the company] should try to establish long-term marketing strategies that can mutually supplement local and global sales.”

Other popular online shopping websites, such as Naning9, Chuu, Bongja Shop and Bagazimuri, have been trying to position their shops as go-to places for what’s hot and trendy at the moment. That requires constant updating. They all deal with Korea-made or Korea-designed clothes, and each outlet shows different collections reflecting the website operators’ taste.

“Many shoppers say it’s better to use Korean online shops to buy Korean products than using any other shopping outlets, as they tend to trust the fashion judgment of these malls’ operators more,” said Choe of MPI, adding that shoppers believe and appreciate that Koreans push for bolder styles. When online shops do sexy, the items are sexier than ones found elsewhere. When they do cute, the items are cuter.

“They know that products they see online aren’t designer brands, but that doesn’t matter, as they want fast fashion, yet stylish things to suit their tastes.”

Although there are increasing numbers of foreign shoppers accessing Korean fashion websites, that doesn’t mean shopping is entirely easy for them.

Basic translations for the websites are provided, which includes prices in different currencies and names of each item. But the more detailed explanations about the materials or other measurement details are not stated in any other language but Korean. Visitors have to guess a lot before making a purchase. Different images of the same jacket - for example, a model posing at different angles, holding a bag, drinking coffee, walking down the street - helps potential shoppers get a feel for the jacket’s fit. But that’s not precise.

Supported by this new trend of foreigners shopping on Korean websites, bigger malls that target larger volumes of shopping are emerging in the online fashion market, including KoreanMall.com, which will launch Tuesday. Posting products on bigger websites can bring more sales opportunities to smaller companies because these companies can reach out to customers even farther away, like in Europe or Central Asia, according to Han Kyung-kyu, a manager of the strategy and planning team for the new online mall. The website even supports Hebrew and Thai to attract more online shoppers to websites of Korean companies.

“We can be the platform for smaller companies that have not yet established some name value or whose products are less known even if they have greater-quality items at low prices,” Han said. He said the new website will take care of showcasing the products, shipping, returns and exchanges, the kind of services that are difficult for smaller online sites to carry out.

“We can expect more shoppers to be visiting, as we are equipped to offer services in their own languages, considering that there’s a big enough market out there now before you add in the extra services we offer.”

The website will display more than 100,000 products from 500 different companies so that shoppers have a bigger selection to browse from. After its official launch on Dec. 1, the website will offer to ship to almost 150 countries in the world and deliver popular electronics items and even food.

Jumping on a bigger ship

More Korean online shops can join this new trend and start targeting potential buyers outside of Korea after the Korea Customs Service said on Thursday that it has implemented a simpler platform for local sellers to report their exports. Korea’s complicated export system has been the barrier to more online shops offering shipping overseas.

According to the customs agency, the new system syncs information from systems used on open markets so that each shop on the market doesn’t have to do extra work. Many online shopping malls struggled to report overseas sales on their own due to the complications of the system and high fees charged by private logistics companies specializing in exports.

For now, the synced service is only available with Kmall24, an open market operated by the Korea International Trade Association. Around 1,300 stores making sales on this platform will have an easier time reporting sales, and the agency will encourage more shops to bring their business on to the platform. It plans to have an information session to explain the new service in greater detail next month.

Another benefit of the new system, the agency said, is that with the improved data it collects, it will release more detailed information on what items are exported and who buys them, which can be useful data for those in the industry looking for new future opportunities.