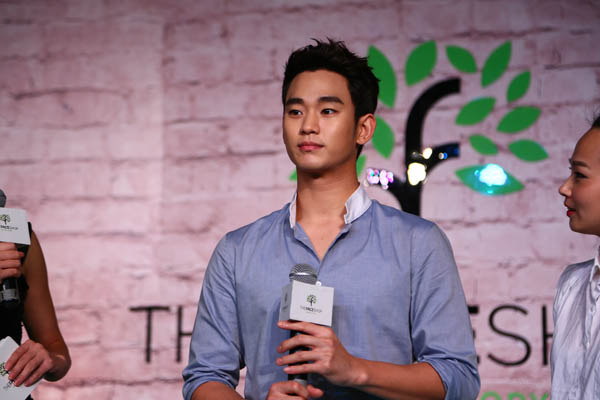 Actor Kim Soo-hyun donated 11 tons of rice to the Salvation Army on Tuesday.

According to Kim’s agency, Keyeast Entertainment, Kim took part in the opening ceremony for the Salvation Army’s annual fund-raiser on Tuesday, held at City Hall in central Seoul.

The Salvation Army holds an opening ceremony in early December before it begins to collect donations.

Keyeast added that the rice has been donated by international and local fans of Kim.

Sending rice to favorite stars on special occasions is a common activity in fan culture because fans believe rice is better than flowers, which are discarded later.

Kim’s fans sent him 520 kilograms (1,150 pounds) of rice when Kim wrapped up shooting for “My Love from the Star” last year, and another 730 kilograms of rice was sent to Kim in July last year to commemorate the seventh anniversary of Kim’s debut.

This May, fans sent rice to Kim when he began a new drama series, “The Producers.”

Keyeast said Kim and his fans have donated up to 20 tons of rice since 2012.