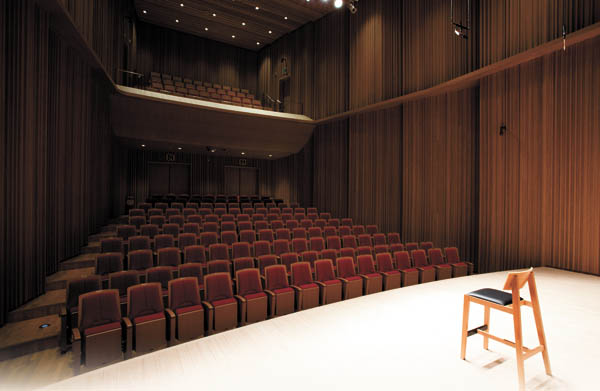 You might be able to bear the noise of people coughing and sneezing or whispering and fidgeting while you’re at a movie theater with a big screen and the latest sound system, or while watching a showy musical with flashy costumes and loud music. But such noises can not be tolerated when you are at a concert hall trying to enjoy classical music.

With an increase in demand for places to enjoy music in absolute silence, small yet high-end spaces are opening up for music-lovers. One of them is the Jaeneung Culture Center, which opened its doors recently in Daehagno, central Seoul. The first artist to experience the art center’s new concert hall, which is optimized for acoustic instruments, was world-renowned violinist Chung Kyung-wha, who performed a solo concert Nov. 17 to celebrate the opening of the art center. Unlike other concert halls, the stage of this 177-seat concert hall only has a few steps, bringing performers a lot closer to the audience.

“I’ve never started a concert with a talk,” Chung said at the beginning of the concert as she explained why she decided to play Bach’s Sonatas and Partitas for the concert. Her voice, even without a microphone, could be heard clearly by those sitting in the last row of the second floor.

“When I went to the Julliard School in 1961 to study violin, they only taught the students how to bow for six months,” she said. “When we were done with that, they made us play the Violin Sonata in G Minor for a few more months. My teacher Ivan Galamian really stressed the importance of Bach’s solo pieces and, thanks to him, this piece became the center of my life. I play it whenever I need a state of balance in my heart.”

In between her playing, she continued to talk with the audience, which was a unique experience, both for Chung and her fans. As the audience was well-aware that the slightest sound or movement would resonate throughout the hall, they naturally became cautious and tried not to draw attention and cause distraction.

Choi Yong-seok, sound director of the art center, said such sound quality in the concert hall is possible due to the wooden walls with vertical grooves from the floor to ceiling. 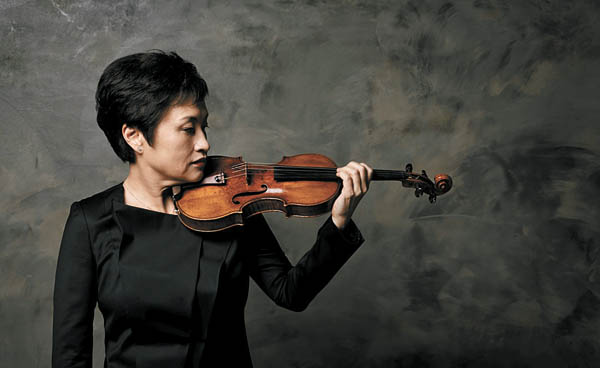 Violinist Chung Kyung-wha performed Bach’s Sonatas and Partitas at a solo concert to celebrate the opening of the Jaeneung Culture Center on Nov. 17. [JCC]

“Do you notice that the depths of these grooves in the wooden walls are all different?” Choi asked. “Because some are deep while others are shallow, it allows for short reflection of the sound, while the high ceiling allows the sound to make a large rotation.”

Such a design allows all members of the audience, regardless of which row they are sitting in, to hear similar sounds at the same time.

“Using wood for the walls is very special because it turns the whole space into another musical instrument,” Choi explained. “As time goes by, it will create its own reverberation.”

The art center, which was established by JEI Corporation, an educational company that publishes study materials under the brand name Jaeneung, consists of two buildings. JCC’s Art Center will hold music concerts and art exhibitions while the Creative Center holds lectures and conducts research.

The center, designed by Japanese architect Tadao Ando, features a stairway leading visitors into the concert hall on which artist Geum Min-jeong’s video piece depicting a waterfall is projected. And artist Park Yeo-joo created the lighting installation “Magic Hour” on another stairway. With the rainbow colors, Park wanted to “rearrange the boundary between space and time, that is neither morning nor night,” according to the company.

Works by seven more artists who interpreted the unique architecture through their artwork - from paintings to photography to media installations - are being displayed at the exhibition hall and at various spots throughout the Art Center. The exhibition continues until Jan. 31. Those who purchase concert tickets can enjoy the exhibition for free, while admission to the exhibition only costs 5,000 won.

Violist Richard Yongjae O’Neill will hold a concert on Dec. 30 at the concert hall, followed by pianist Lim Hyun-jung on Jan. 12. And at 11 a.m. every Thursday and Saturday there are classical music programs for kids, in an effort to foster future classical music fans.

Besides the new art center, there’s another new black building in Itaewon, central Seoul, that looks just like an Astell&Kern AK240 portable hi-fi speaker. Called Stradium, the venue lures visitors who want a quiet place to listen to music. 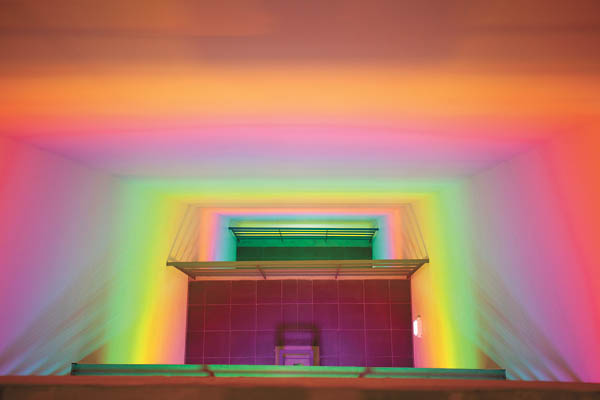 The ground floor of the building houses the Sound Gallery, which looks like a library. Yet, instead of desks for reading books, the room features seats with headphones and audio players. The 15 different listening stations each have a different own theme. For example, the one called “Starry Night” plays Korean pop songs from the old days, while “Rainy Days” has a playlist of songs that are perfect to listen to when it rains.

The basement floor is the highlight of this musical haven, housing the Sound Alcove. This space is optimized for those who really want to get comfortable and listen to music of their choice. It’s divided into two sections: a pop and R&B section and a jazz and classics section. Here, visitors can experience Astell&Kern’s signature Mastering Quality Sound system. Curators are available to help explain and pick out playlists for visitors.

“We come up with playlists depending on the time and day or an event,” said Jo Ju-yeon, a curator at the Sound Alcove. “During those days to commemorate the first anniversary of Shin Hae-chul’s death or when pianist Cho Seong-jin won the competition, we selected songs related to those events.”

As there are 10 headphones and seats available in each room, Jo explained that visitors can come with friends in groups as well. The entrance fee is 10,000 won, which includes a cup of Paul Bassett coffee from the cafe on the fourth floor.

From left to right:Stradium is a new black building that looks like an Astell&Kern speaker, located in Itaewon, central Seoul; Visitors can quietly listen to music using headphones in the building’s Sound Alcove, located in the basement. [STRADIUM]

From left to right: The Sound Alcove has 10 individual spaces, each equipped with headphones; The multi-purpose concert hall located on the second floor is popular among artists for holding small-scale concerts and talks. [STRADIUM]