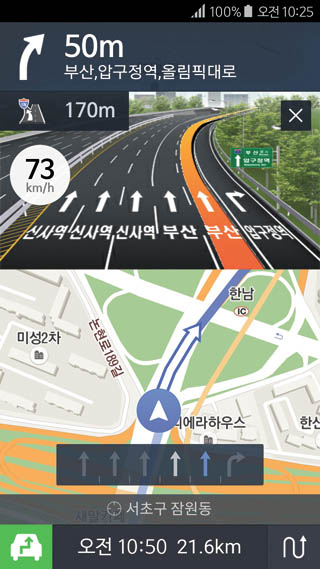 Naver’s new navigation function on its map application is designed to give users the fastest routes and offer different types of maps. [NAVER]

The new feature is baked into the preexisting Naver Map application and will include voice-guided service.

The navigation feature is currently only available to Android users, but an iOS version is anticipated by the end of December.

Naver will differentiate its service by tapping into the vast source of information available on its portal site.

For instance, users can see detailed information about destinations and places near their route sourced from the portal in the same way that the Google Maps uses Google Local to provide extra information.

For destinations like restaurants or shops, Naver will show operating hours and reviews.

The current version primarily focuses on directional services, but more information will be integrated as the service grows. Naver added that it also plans to include different voice recognition features and the collection of in-vehicle information.

The navigation feature offers multiple routes to avoid traffic, highways, or tolls. But the default option is the fastest, lowest-traffic route.

Users can also choose the way a map is shown, including a three-dimensional option.

Naver Map is the most-used map app in the country with over 10 million users. Naver expects the broad user base will give it a competitive edge over apps like T map and Kimgisa.

The top player is currently T map, which boasts the largest number of users at 7.6 million. The app is often used by taxi drivers as it is known for its accuracy and real-time traffic data.

But competitor Kimgisa is on the rise, backed by Kakao, the operator of internet portal Daum and instant messaging app KakaoTalk. Kakao recently took a bite out of T map by enmeshing Kimgisia with its taxi hailing app Kakao Taxi.

All taxi drivers registered with Kakao Taxi are required to use Kimgisa when they take customers using the service.

The key feature of Kimgisa is crowd-sourced traffic information. The social element allows its users to report construction, accidents, speed traps and other hindrances. The app has 1.7 million users as of October, according to online research firm Nielsen KoreanClick.