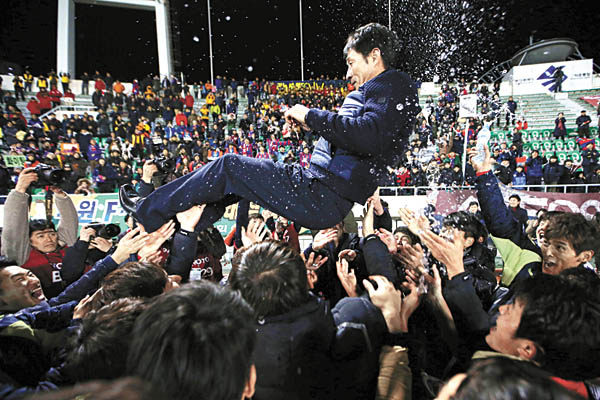 Second-division club Suwon FC will play in the first-division K-League Classic next season after it won the K-League promotion-relegation playoff over Busan I’Park FC on Saturday.

In the second leg of the playoff held at Gudeok Stadium in Busan, Suwon, which finished third in the second-division K-League Challenge, beat Busan 2-0 to win the playoffs with an aggregate score of 3-0.

Suwon reached the promotion-relegation playoff by edging out Seoul E-Land and Daegu FC in the Challenge playoffs.

Suwon was originally founded as an amateur club from Suwon City Hall and played in the third-tier National League. But the team turned professional in 2013.

Suwon has now made history by becoming the first original Challenge club to play in the first division. Since the K-League adopted promotion-relegation system in 2012, Sangju Sangmu, Gwangju FC and Daejeon Citizen have been promoted from the second division, but these teams previously played in the first division.

Busan had to play the playoffs after finishing 11th in the Classic this season. The four-time K-League Classic champions is the first corporate-owned team to be demoted to the second division. The team is run by Hyundai Development, and Korea Football Association President Chung Mong-gyu, who is also the former K-League commissioner, is the chairman of the conglomerate.

The promotion of Suwon means that the K-League Classic next year will have derby match in the same city. Currently, the league has another Suwon-based club, the Suwon Samsung Bluewings, which is run by the country’s top conglomerate.

“Although I feel there is a little pressure for the regional derby, the promotion of Suwon FC will have a positive effect of boosting the competitive atmosphere in the K-League,” Bluewings captain Yeom Ki-hun told the JoongAng Ilbo.

Suwon’s success came from coach Cho Duck-jae, who was named the Coach of the Year in the K-League Challenge. The 50-year-old edged out Park Hang-seo, coach of Sangju Sangmu FC, which is also going to play in the K-League Classic next season as the second-division champion.

Cho, who took the helm in 2012, has been known for his “attacking-only” tactics in the league. Though his team earned the honor of playing in the first division, Cho was already looking ahead to next season.

“Going to the Classic is every Challenge clubs’ dream, but I never thought I would be there,” he said. “But we have to start again. Half of our starting members have to do their military service or go back to their original team as their loan contracts end.”

As the team will play Korea’s top football clubs next year, the Suwon city government is planning to increase the club’s budget. Suwon Mayor Yeom Tae-young previously said that if Suwon reaches the first division, the city would double the budget to 10 billion won ($8.6 million) next year.

Cho said that regardless of the changes, the team will not change its style. “Instead of thinking about how to play in a Suwon derby, we will try to focus on how to show ‘attacking-only’ football’ in the Classic,” he said.