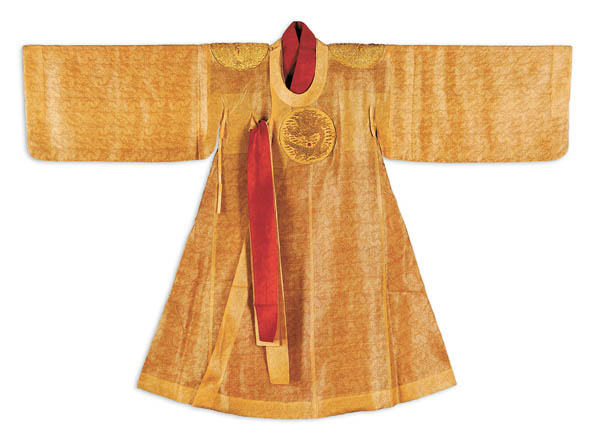 The yellow royal robe has certainly lost some of the golden sparkle it would have had originally.

But the robe - worn by Gojong (1852-1919), the last king of the Joseon Dynasty and first emperor of the Korean Empire (1897-1910) - embodies Korea’s determination to stay independent amid increasing territorial encroachment from Japan and China. And for the first time, you can catch a glimpse of it yourself.

Korean kings during Joseon usually wore red robes for daily state affairs, since the days of King Sejong (1397-1450). These were called gonnyongpo. 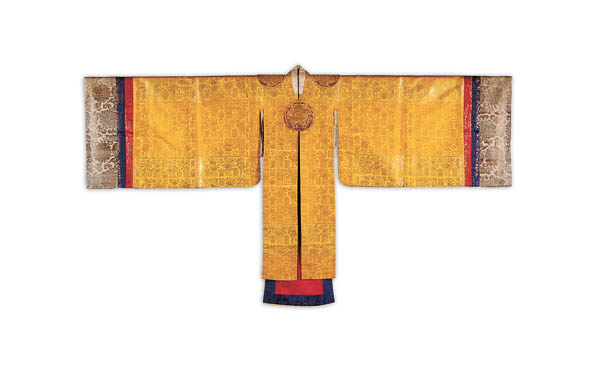 But Gojong declared in October 1897 that Korea would be an empire from then on. Some countries laughed when the fading dynasty declared itself an empire in hopes reversing its decline. But Gojong was serious: He changed all the royal customs so that they would befit an empire, including the style of the royal robes.

The emperor’s golden royal robe along with the golden ceremonial gown worn by the empress - which are both on the state-designated Important Folklore Cultural Heritage list - are currently on display at a special exhibition at the Sejong University Museum in Gwangjin District, eastern Seoul.

The school, which traces its origin to Soodo Women’s College of Education established in 1954, came to possess the robes when a former member of the royal court who kept the robes during Japanese colonization (1910-45) donated them to the school.

“The women’s college used to have a very strong department for home economics,” museum director and professor of history Ha Moon-sig said. “So a court lady donated the wardrobes to our university on condition that they be used for education.”

The museum emphasized that such golden royal robes cannot be found anywhere else in Korea, and that it’s the first time for the museum to exhibit these rare pieces due to preservation difficulties.

On display are two emperors’ golden royal robes - one with wide sleeves and the other with slimmer sleeves. They were worn by Gojong as well as his son, Sunjong (1874-1926). “The size shows that Gojong had a small physique, but it also attests how he was rather frugal and practical,” Ha said.

The museum is also displaying paeok, jade ornaments worn by Emperor Gojong with the ceremonial robe that are Important Folklore Cultural Heritage No. 46.