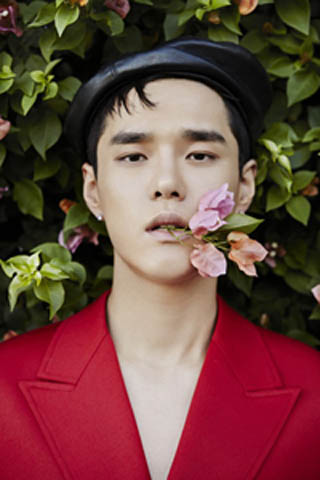 Korean musician DEAN, whose real name is Kwon Hyuk, certainly stands out among the countless K-pop singers who have debuted this year.

Instead of targeting the domestic audience, the 23-year-old R&B artist made his name known in the U.S. market first by releasing his single “I Am Not Sorry,” featuring Grammy winner Eric Bellinger.

Then he made inroads in the Korean music scene, releasing two singles - “I Love It,” featuring Dok2, and “Pour Up,” featuring Zico, both of whom are very well-known hip-hop musicians here. DEAN’s previous career as a songwriter, working with Exo, John Park and more, gave him a leg up in the competitive K-pop scene.

In a recent interview with Ilgan Sports, an affiliate of the Korea JoongAng Daily, the up-and-coming musician said he feels utmost happiness while singing his own songs.

Q. When did you start doing music?

A. I have been playing music since I was 16 years old. I feel very comfortable with rap. It was kind of my breakthrough when I was studying. I don’t think I ever considered music as a proper occupation, which is why I felt that much less pressure when I first started it.

How did you become a proper musician then?

When I was 19, I played one of my songs for an acquaintance, and he played it for others until it found its way to Shin Hyuk, the CEO of Joombas Music Group. He suggested me a spot as a songwriter, and that was the start of my career in this field.

How did you collaborate with Eric Bellinger for your debut single?

When I was staying in the United States, introducing my music to important people out there, I happened to form a connection with Bellinger, and it all happened very naturally.

How was your performance in the United States?

I am yet to be acknowledged there since there are so many talented singers. But I am going to keep trying. I realized that in the U.S. market, it is far more important to have one’s own distinct color than conforming to a universal pop singer image.

Do you have any stories from the U.S.?

I was on a promotional tour one day, and I visited a city that was mostly African-American. One woman at a restaurant didn’t believe I was an R&B singer and laughed about it, so I sang in front of her and finally she believed me. It was funny, but at the same time, I kind of felt the urge to convince people that I am a talented singer.

What is your distinctive trait?

First of all, the fact that I’m Asian differentiates me there. The U.S. market doesn’t think I have a good command of R&B because they think the genre is the territory of African-Americans. I think I am doing hybrid music which is based on R&B.

What kind of music do you want to do in the future?

I want to make something that is fresh and emotional but not completely groundless. A lot of music these days depends a lot on visuals, but I want to make songs that when you listen to with your eyes closed, you can picture the singer’s facial expression and background just like a scene in a movie.