KCTU leader to remain at temple

KCTU leader to remain at temple 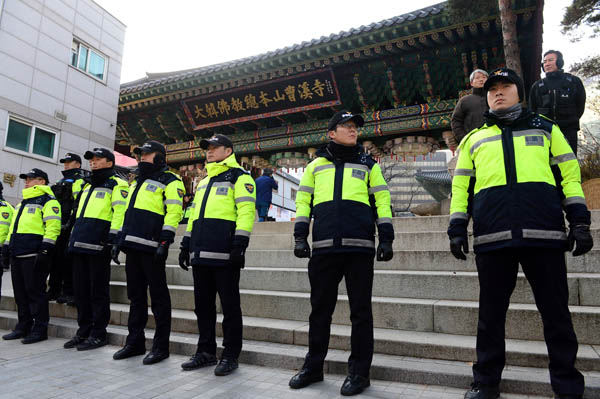 Police officers stand guard around the Jogye Temple in Jongno District, central Seoul, on Monday to besiege Han Sang-gyun, the head of the Korean Confederation of Trade Unions (KCTU), who has been hiding out in the temple since a mass rally on Nov. 14 turned violent. [NEWSIS]

Han Sang-gyun, the head of the Korean Confederation of Trade Unions (KCTU) who is currently taking refuge with a Buddhist order, declared Monday that he will not leave the Jogye Temple for the time being and heed demands that he turn himself in to police.

“I cannot abandon the calls of some 20 million laborers to block regressive labor reforms,” the 53-year-old said in a letter of appeal protesting the ruling party’s push to pass a package of labor bills in the National Assembly. “Please take into consideration the position that I cannot leave the Jogye Temple right now.”

His statement came despite authorities’ expectations that Han would give himself up to police after the second anti-government rally held Saturday, which included some 500 labor groups and civic organizations, ended peacefully.

Han has been hiding out at the temple since Nov. 16 to avoid arrest for orchestrating an anti-government rally on Nov. 14, in Gwanghwamun, central Seoul, that turned violent.

Officials from the KCTU, one of the country’s two largest umbrella labor unions, held a press conference Monday morning in front of the Jogye Temple in Jongno District, central Seoul, to convey the letter of appeal on behalf of their chairman.

The Jogye Order of Korean Buddhism Lay Buddhist Association has asked Han to leave multiple times and voluntarily turn himself into the police. Han, who has faced off against leaders of the association, initially indicated that he would turn himself in after the Saturday rally concluded smoothly.

Since Saturday, the Jogye Order twice requested that Han voluntarily leave, but the labor union head has insisted that he will not budge until the labor union reforms - which the group claims are detrimental to blue-collar and temporary workers - are blocked in the National Assembly.

“It has been 22 days since the Buddha has embraced this laborer at the edge of a cliff,” Han said in the plea letter. “Until the labor reform situation in the National Assembly is resolved, I hope for deep generosity, as I cannot help but entrust my protection to the Jogye Temple.

“If the labor reforms are halted, I plan to voluntarily turn myself in [to police], accompanied by the Venerable Dobeob, and I will not flee to another place.”

He also requested that police forces in and around the temple be withdrawn.

“If there is no significant action or decision made by Chairman Han, the KCTU and the Jogye Order, we will have to review other measures,” said Kang Sin-myeong, the commissioner general of the National Police Agency.

“Refusing to respond to an arrest warrant and hiding at a religious institution,” he said, “is making a mockery of government authority.”