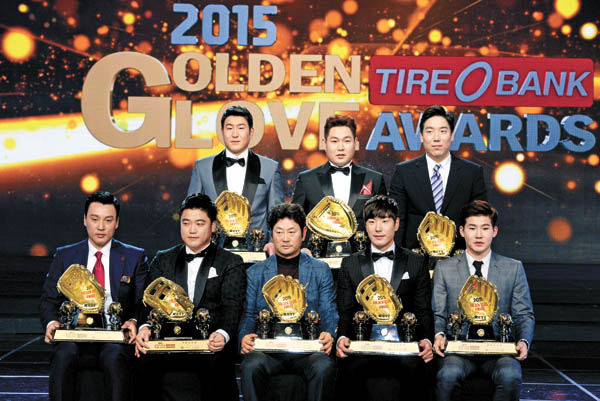 And at the 2015 Golden Glove Awards on Tuesday the pair went head-to-head again, where the 29-year-old American collected 227 votes, 111 votes more than Park in the first baseman category.

Park last week completed a $12 million, four-year deal to transfer from Nexen Heroes to the Minnesota Twins in the Major League Baseball. 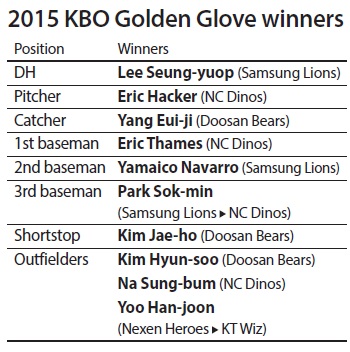 The two players were candidates in first baseman category along with the 2015 KBO Rookie of the Year winner Koo Ja-wook of Samsung Lions, who had nine votes, and Brett Pill of Kia Tigers who got six.

Thames became first foreign player in KBO history to win the Golden Glove as a first baseman. Last month he became the third foreign player to be awarded the MVP award. Thames wasn’t at the ceremony as he is home in the U.S.

Thames had .996 fielding percentage (FPCT), which was .006 better than Park’s. The FPCT reflects the percentage of times a defensive player properly handles a batted or thrown ball.

Park was hoping for his fourth straight Golden Glove award. With the Heroes, the 29-year-old slugger finished this season No. 1 in home runs (53) and RBIs (146), becoming the first player in KBO history to win both categories for four consecutive seasons.

He also became the first player ever to hit 50 or more home runs for two straight seasons, while setting a new single season RBI record, which was previously held by Samsung Lions’ Lee Seung-yuop at 144 in 2003.

Park, who is in the U.S. after signing with the Twins last week, has been asked to play as a designated hitter.

They were candidates along with the Tigers closer Yoon Suk-min, and three Lions pitchers Cha Woo-chan, An Ji-man and Lim Chang-yong.

Samsung Lions’ Yamaico Navarro also became the first foreign player to receive an award in the second baseman category. The 28-year-old Dominican was second in home runs (48) and third in RBIs (137) this season. He edged players like Oh Jae-won of Bears and Jeong Keun-woo of Hanwha Eagles.

With Thames, Hacker and Navarro named as winners, this is the first time in KBO history that three foreigners have claimed the Golden Glove in the single season. Previously, only two foreign players won a Golden Glove in 1999 and 2005.

He spent 12 years with the Lions before moving to the Dinos with a four year deal worth 9.6 billion won with an option, which made him the most expensive player in the KBO history

For outfielders, where 12 players competed for three spots, Bears’ Kim Hyun-soo, Dinos’ Na Sung-bum and Yoo Han-joon, who recently moved from Nexen Heroes to KT Wiz as a free agent, took the honors.

The ceremony was especially meaningful for Bears’ Kim who is looking to play in the MLB as a free agent. Kim, who also was MVP for the Premier 12 tournament last month, got his fourth Golden Glove after winning three straight from 2008 to 2010.

“I received a call from my agent [in the U.S] and he told me to just wait for a short while,” Kim said. “I don’t know where I will play next season, but I always want to thank my Bears fans and I wish they can support me till the end.”

Na won his second straight Golden Gloves, while it was the first prize for 34-year-old Yoo.

As for the designated hitter, the Lions veteran Lee Seung-yuop - who is already a player with the most Golden Gloves in the KBO history - defended the title and got his 10th Golden Glove. At the age of 39 years, 3 months and 20 days, Lee also became the oldest winner of the Golden Glove, breaking the record of the LG Twins’ Lee Byung-kyu in 2013. Lee Seung-yuop received seven awards as a first baseman in early 2000s, before moving to Japan. This was his third title as a designated hitter after returning to the KBO in 2012. He has claimed the Golden Glove 10 times in his 13 seasons in the KBO.

“I’m now entering my 40s, and I hope my performance can boost those who are in 40s,” said Lee, who is all-time home-run leader in the KBO.

The KBO announced 44 candidates last month based on its own qualification standards. Under the rule, the Golden Glove candidates for pitchers need to have 3.50 ERA or lower and have at least 15 wins or 30 saves in the regular season.

Positioned players qualify by playing at least 96 games and played in defense. They also need to meet batting average standards, which differ by each position.

Unlike the MVP and the Rookie of the Year selection, the KBO Golden Glove Award winners are selected by a vote from baseball reporters as well as producers and analysts from the broadcasting company.

The votes were cast from Nov. 30 to Dec. 4, which caused concern over whether the votes are made too late because the regular season ended two months ago. During the two months, the KBO had post season games, while some candidate players went on to play the Premier 12 tournament to highlight their performance to fans.