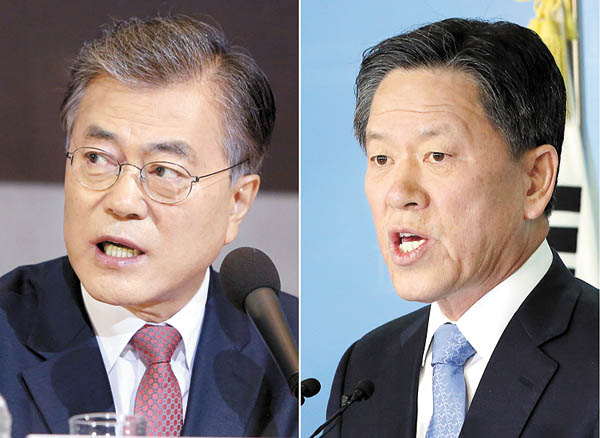 The internal power struggle in the main opposition party intensified on Tuesday as Chairman Moon Jae-in flatly turned down a rival’s demand to hold a new leadership election.

The leadership of the New Politics Alliance for Democracy (NPAD) faces a grave challenge by political rivals including Rep. Ahn Cheol-soo, who co-founded the party two years ago. Moon was elected chairman in February 2015.

“We are facing a general election [in April], and I cannot accept a proposal to have a competition for the party leadership, which is destined to split the party,” Moon said on Tuesday in a panel discussion hosted by the Kwanhun Club, an organization of senior journalists.

Ahn has demanded a party convention be held next month to elect a new party leader. When Moon didn’t respond, Ahn issued an ultimatum on Sunday and hinted at the possibility that he may abandon the party.

“I would like to tell Ahn once again that we must work together,” Moon said. “If Ahn and I turn against each other and compete, party members and supporters won’t forgive us.”

Moon offered a compromise to Ahn. He said he could resign and hold a leadership election if it were to create a larger liberal party by inviting other political forces such as the Justice Party and a new party to be established by independent Rep. Chun Jung-bae.

The embattled NPAD chairman also dismissed the possibility that Ahn will abandon the party.

“As a co-founder, I don’t think it makes sense that he will leave,” Moon said. “I don’t think he will quit the party because his demand for my resignation is not accepted. I think he is just saying that to pressure me.”

Moon and Ahn were rival candidates in the 2012 presidential elections. Moon was the candidate of the Democratic Party, and Ahn was an independent who gained prominence based on his career as a doctor-turned-software tycoon. In a bid to unite liberal votes, the two negotiated a candidacy consolidation, but Ahn bitterly withdrew from the race after being continually outmaneuvered by Moon. Moon was narrowly defeated by Park Geun-hye.

Ahn established his own political group and later joined with Moon and Kim Han-gill to found the NPAD in March 2014. The new party was a merger of the main opposition Democratic Party and Ahn’s supporters.

“The NPAD is at a critical juncture, and we need wisdom like the judgment of Solomon,” Moon said. “This is no time to argue. We must mend the internal rupture and unite our power for a new beginning.”

Moon said his goal for the April general election is preventing the ruling Saenuri Party from winning a majority in the 300-seat National Assembly. As of now, the Saenuri Party controls 157 seats and the NPAD 127.

“If I fail, that will be the end of my political life,” Moon proclaimed.

While the NPAD has repeatedly vowed to root out factionalism, it is largely divided between allies of Moon and others. The Moon allies are often referred to as the pro-Roh faction, named after the late President Roh Moo-hyun, under whom Moon served as chief of staff.

Of the 127 NPAD lawmakers, more than 50 are considered to be in the pro-Roh faction.

Those who are not members of the pro-Roh faction include various political groups. Many older politicians were associates of the late President Kim Dae-jung, such as Rep. Park Jie-won, and they are supported by elder voters in the Jeolla region and Gwangju, while moderates form a group with NPAD co-founder Kim Han-gill at its center. Ahn has his own group of supporters.

While the minority factions differ in their philosophies and political styles, they all chafe under the pro-Roh faction’s control over the NPAD.

Ahn remained quiet for two consecutive days after he issued the ultimatum to Moon and left for Busan, his hometown. Other senior NPAD politicians also intensified their pressure on Moon to step down. Rep. Joo Seung-yong, a member of the NPAD Supreme Council, said on Tuesday that he will resign from the party’s highest decision-making body.

“I am resigning from the Supreme Council to create a breakthrough,” Joo said. “Now, it is Chairman Moon’s turn to make a decision.”

Joo is the second Supreme Council member to quit the council in an apparent attempt to overthrow the Moon leadership.

The Supreme Council has nine members. Five were elected through a February convention. The party’s chairman and floor leader were automatically included, and the chairman appointed two more members. Of the five elected members, Rep. Oh Young-sick quit last month to protest Moon’s way of leading the party.

Most of the remaining seven members are Moon allies. Rep. Lee Jong-kul, the floor leader, is not a Moon associate, but he would have to abandon his floor leader post to quit the Supreme Council.