Slide in home deals may be sign of slow 2016 market

Slide in home deals may be sign of slow 2016 market 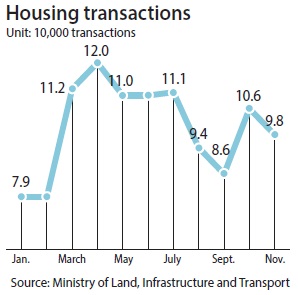 Housing transactions continued to rise in November compared to a year earlier, but growth slowed from the previous month, raising concerns of a lukewarm housing market next year.

The Ministry of Land, Infrastructure and Transport said on Wednesday that 97,813 housing sales transactions were made during November, up 7.4 percent from the same month last year.

For the third straight month, however, growth remained below 10 percent, indicating a slowdown in the market. Transactions fell 8 percent from October.

“It is true that transactions declined in the latter five months of the year compared to before June,” a Land Ministry official said. “It is too early to say the market has slowed down.”

The ministry said November is usually a slow season due to weather.

Thanks to the financial authority’s loosening of the debt-to-income and loan-to-value rules, housing transactions surged 50.1 percent in the first six months of this year compared to the same period last year.

The aggregate number of transactions recorded 1.1 million as of November, up 21 percent from a year earlier. The figure is the largest ever. The previous record was 1.08 million in 2006.

From March through August, monthly growth was up 20 to 50 percent year on year. But since September, growth has been slowing.

On an accumulated basis from January through November, transactions in Seoul and nearby areas jumped 33.9 percent. Those in the other areas went up 9.8 percent.