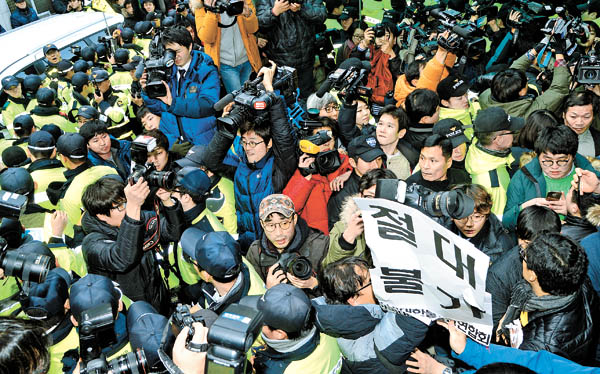 In the Jogye Temple compound on Wednesday, policemen scuffle with people who oppose the arrest of Han Sang-gyun, head of the Korean Confederation of Trade Unions, as police tried to storm the temple where Han has been taking refuge for more than three weeks. [NEWSIS]

Police raided the Jogye Temple on Wednesday but stopped short of extracting a wanted labor union leader from his refuge after accepting a Buddhist leader’s compromise for a new deadline of noon today.

As police came close to arresting Han Sang-gyun, leader of the Korean Confederation of Trade Unions (KCTU), for leading a rally in Seoul on Nov. 14 that turned violent, the head of the Jogye Order pleaded for more time to settle the situation.

“We will decide Han’s course of action by 12 p.m. tomorrow [Thursday],” said the Venerable Jaseung, president of the Jogye Order of Korean Buddhism, at a press conference. “We urge the police and KCTU to stop and wait for our action.”

Tension was temporarily eased as authorities, who were ready to take Han into custody, were withdrawn. Around 1,000 policemen and detectives were deployed in the temple, surrounding the main hall where Han was in hiding.

Police put green mattresses near the building, fearing that Han might throw himself off the roof. Hundreds of monks and union members supporting the wanted man made so-called “human walls” to prevent police from entering the building.

KCTU head Han, who has taken refuge in the temple for more than three weeks, maintained total silence through Wednesday evening’s press time.

The leader of the umbrella union group fled to the temple on Nov. 16 to avoid arrest for orchestrating a large, antigovernment rally in Gwanghwamun, central Seoul, on Nov. 14 that ended up with clashes between police and protesters. The rally drew 60,000 people to protest labor reform bills, education policies and other policies of the Park Geun-hye government.

Police issued a 24-hour ultimatum to Han on Tuesday afternoon to leave the temple, blaming him for inciting acts of violence.

The Jogye Order - Korea’s most influential Buddhist group with millions of believers - strongly opposed the police’s plan to use force to arrest Han.

“If the police raid the temple, it is nothing less than a state crackdown on the Jogye Order and on Buddhism in Korea,” the order said in a statement early Wednesday, asking the police not to storm into its temple.

“The entire responsibility for the consequences of the raid will be on the government,” the Buddhist group said. It urged Han to make a decision on a course of action as soon as possible.

The KCTU, the second-largest umbrella union in Korea, has more than 691,000 members in major industries, including construction and transport.

The militant union repeated its threat to immediately go on a general strike if the police arrested its leader. It has scheduled a strike for Dec. 16 to protest the proposed labor reform.

In Korea, religious venues have served as sanctuaries for political activists avoiding state arrest. Along with Myeongdong Cathedral, situated in the heart of downtown Seoul, the Jogye Temple has often played that role, although there is no law to prevent police storming it.

The last time police raided the 620-year-old temple was in March 2002, when they arrested labor activists from a militant power plant union. Police made a public apology afterward.