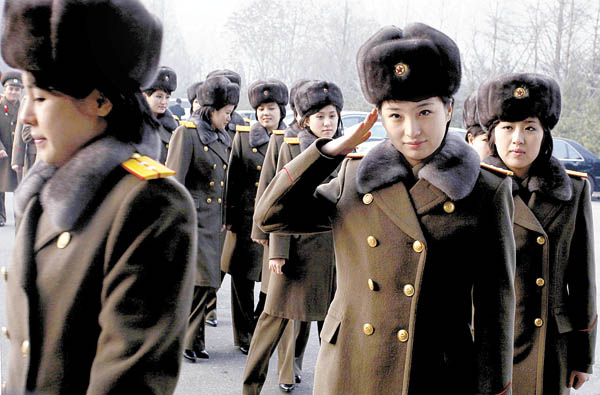 Members of the Moranbong Band and the State Merited Chorus of North Korea walk to board a train at the station in Pyongyang on Wednesday. They are scheduled to perform in China over the next five days. [AP/NEWSIS]

North Korea’s all-female Moranbong band is scheduled to perform in China over the next five days in the group’s first overseas concert series, in what is being interpreted as a sign of a thaw in relations between the longtime allies.

The state-run Korean Central News Agency (KCNA) reported Tuesday that the Moranbong band will stage performances in China on a five-day trip from today until Tuesday along with the Merited State Chorus of the Korean People’s Army.

According to the KCNA, the visit serves to enhance understanding and cultural ties between the two nations, though no details were disclosed on the group’s performance schedule or itinerary.

The trip by the 10-member band has been interpreted as an effort by the two Communist countries to mend ties, which soured in the first years of Kim Jong-un’s reign after Pyongyang carried out its third nuclear test in 2013 despite warnings from Beijing.

Kim established the Moranbong band in 2012, just months after he took the helm of the country upon his father’s death in December 2011. The young leader’s penchant for Western pop culture is evidenced in the group’s stylish outfits and their use of electronic instruments.

The band drew international media attention in 2012, when Mickey Mouse and Winnie the Pooh took the stage in a rather bizarre Disney-themed performance for Kim. The appearance of the iconic American cartoon character came as a surprise given the acrimonious history between Pyongyang and Washington, which is viewed as an imperialist enemy.

The band’s emergence subsequently raised expectations that the young leader might try to open the traditionally reclusive Communist state to the outside world.

However, Pyongyang has yet to make a major overture hinting in that direction.

In September, the Moranbong band staged a performance to welcome a Cuban delegation led by Miguel Diaz-Canel Bermudez, the first vice president of the Council of State, playing well-known Spanish songs “Guantanamera” and “Capri Island,” among others.

The band also performed on Oct. 10, in celebration of the 70th anniversary of the founding of the ruling Workers’ Party of North Korea.

Liu Yunsha, the fifth-highest ranking official in the Communist Party of China, visited Pyongyang with a delegation from Beijing to mark the event and attended the performance.