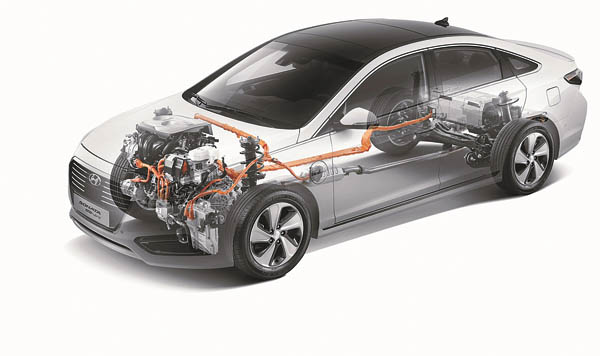 One of Hyundai Motor’s eco-friendly power trains has been selected as one of the 10 best engines in the world by a major U.S. automotive magazine, the company said Friday.

This is the second straight year that a Hyundai Motor engine has made the list.

“For Hyundai Motor’s first entry into the plug-in hybrid segment, the company’s engineers did an impeccable job blending fuel efficiency with refinement and daily usability,” Drew Winter, editor-in-chief of the magazine, said.

The Sonata PHEV is powered by Hyundai’s 2.0-liter (0.5-gallon) Nu four-cylinder GDI engine, which provides 154 horsepower and 19.3 kilogram-meter of torque, as well as fuel efficiency at 17.7 kilometers per liter (41.6 miles per gallon).

Hyundai Motor released its Sonata PHEV on the local market in July, followed by the U.S. market in November. It provides the power delivery of a conventional gasoline engine, which is better suited for long trips, with the additional benefit of an eco-friendly all-electric range for commuting, the company said.

The Ministry of Environment recently decided to provide 5 million won ($4,200) in subsides for buyers of PHEV vehicles in order to raise demand, because they’re more expensive than other hybrids being sold in the country.

“This award provides a recognized platform to highlight the technological and environmental leadership of the entire Sonata family,” said Mike O’Brien, vice president of corporate and product planning at Hyundai Motor America. “The award demonstrates Hyundai Motor’s continued momentum as a leader in advanced power trains.”

This is the 22nd year that Ward has released the engine list, and Hyundai Motor has been honored five times.

The 2016 awards ceremony will take place at the North American International Auto Show on Jan. 13 in Detroit.

“It is meaningful that we have won an award in the environmentally friendly category for two years in a row,” a Hyundai Motor spokesman said. “We will keep trying to lead the industry in the segment and expand our green car lineup.”