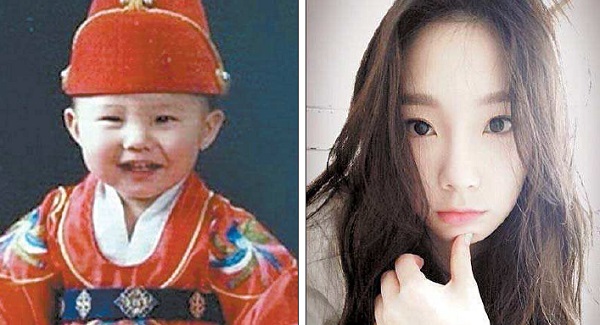 Left: A photo from the first birthday of Big Bang’s G-Dragon, which he posted to his Instagram. He has 6.1 million followers, the most among Koreans. Right: A selfie uploaded by Girls’ Generation member Taeyeon. [JOONGANG ILBO]

From the world’s most popular singer-songwriter Taylor Swift to the controversial Kim Kardashian and Justin Bieber, popular Hollywood celebrities can garner more than 50 million followers apiece on their Instagram accounts.

It’s no surprise, then, that high-profile Korean stars are following suit, using their Instagram accounts to both approach their fans on a more personal level and promote their personal brand.

Instagram, which was struggling against local social networking services, including powerhouse KakaoTalk, up until early last year, has been seeing a surge in the number of Korean users and celebrities participating.

Some of the Korean celebrities with the largest followings include G-Dragon of the boy group Big Bang and Taeyeon of Girls’ Generation.

Even though Korean A-listers have fewer followers than their global counterparts, G-Dragon still has over six million followers, while Taeyeon has five million.

High-profile athletes competing overseas are also active on Instagram. This includes soccer player Son Heung-min, who is playing in the English Premier League for Tottenham Hotspur. Son shares pictures of the goals he’s made with his fans.

Major leaguer Ryu Hyun-jin, who is a pitcher for the Los Angeles Dodgers, also uses Instagram.

As the role that Instagram plays in Seoul’s social media scene has rapidly grown, Instagram has been working to increase awareness of its advertising services among Korean companies.

The company launched its services here in September.

In a statement, the company said it will offer both individuals and big companies the same ability to advertise on users’ feeds using both photos and videos.

“For users who have high expectations of visual inspiration and companies that want to communicate creatively, I believe Instagram will come as a new alternative,” Cho Yong-bum, Facebook Korea CEO, said when the ad services were first announced.

Instagram launched its advertisement service first in the United States in November 2013 and has since expanded to eight counties, including Germany, the United Kingdom, France, Australia and Japan.

According to a report by eMarketer released in September, global social networks’ advertisement revenue is expected to reach $25.14 billion this year, 40 percent more than in 2014.

That figure is expected to nearly double by 2017 to $41 billion.

The report projected that Instagram will rake in $595 million in advertisements this year, surging to $2.8 billion by 2017 and accounting for 10 percent of the $26.98 billion that Facebook will make.