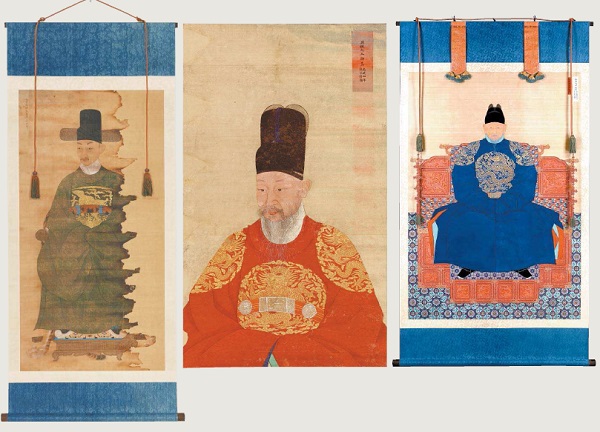 Creating a portrait of the king was a tradition that traced back to the Goryeo Dynasty (918-1392). And the kings of Joseon had many portraits done of themselves. Sometimes, they had new portraits made just to update the look. Other times, they did so to reinforce their power.

But today only a handful of royal portraits from the Joseon Dynasty are known to still exist.

According to historical records from 1930, there were a total of 48 royal portraits kept at a shrine within Changdeok Palace, known as Seonwonjeon. Then during the Korean War (1950-53) they were moved to Busan. But when a fire broke out at the facility where they were housed, only 18 survived, including the ones that suffered damage in the fire.

For example, King Taejo (1335-1408), the founder of the Joseon Dynasty, had 26 portraits made of himself. Today, however, only one portrait remains - at Gyeonggijeon Shrine in Jeonju, North Jeolla.

But a new exhibition at the National Palace Museum of Korea in central Seoul is exploring the world of royal portraits of Joseon. Some of the royal portraits on display have never been revealed to the public before. And some on display were significantly damaged by fire, apparent scars from the Korean War.

Titled “King’s Portrait and Royal Portrait Hall of the Joseon Dynasty,” the exhibition showcases about 100 artifacts which include royal portraits as well as articles related to the portraits and the rituals that surround them.

“A king’s portrait was like a king himself,” said No Myeong-gu of the museum’s exhibition and publicity division.

“When moving the portrait, a palanquin was used as well as other items used in royal processions. And when portraits and halls for keeping the portraits are damaged in a fire and other incidents, government officials and court officials wore mourning clothes and wailed.”

The portrait of King Taejo (National Treasure No. 317) will also be on display at the exhibition, although only for two weeks of the two-month-long show.

There were two types of Joseon Dynasty portrait halls where the portraits of kings were enshrined, according to museum officials: One where portraits of several kings are kept, like Seonwonjeon in Changdeok Palace, and the other where a portrait of one king is kept, like Gyeonggijeon in Jeonju.

The portrait of King Taejo is the only surviving portrait from the latter type.

Two portraits of King Yeongjo (1694-1776) are also on display, both of which are state treasures. One was painted in 1714 when he was 21 years old, and the other was made in 1900, copying another one done in 1744 when he was 51. Comparing how he aged is an added element of fun. On the older one, damage from the fire is evident. 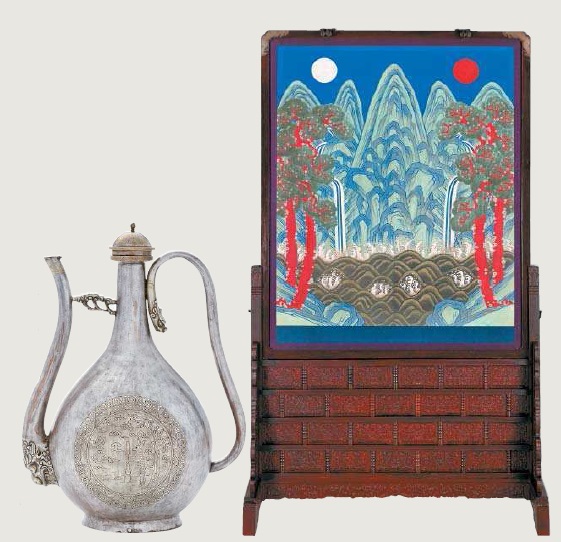 Portraits from Joseon were made in three ways: By observing the king and painting him, by making a painting based on memories of the king, and finally by copying existing portraits.

The exhibition also displays paintings that were placed alongside royal portraits at portrait halls. These include ilwolobongdo, the famous depiction of the sun, moon and five peaks, which symbolized power and eternity and was placed behind a king’s throne. A folding screen featuring peonies, another symbol often found at the royal court of Joseon, is also exhibited.

Other objects used at rituals surrounding the portraits are exhibited. They include a lacquered storage box for the portraits, a gilt-silver ewer and a gilt-bronze incense burner.

The exhibition runs through Feb. 14. Admission is free. Hours are between 9 a.m. and 6 p.m. for weekdays and 9 a.m. and 7 p.m. for the weekends and holidays. The museum closes on every Monday. The museum is located inside the grounds of Gyeongbok Palace in downtown Seoul. For more information, call 02-3701-7500 or visit www.gogung.co.kr.