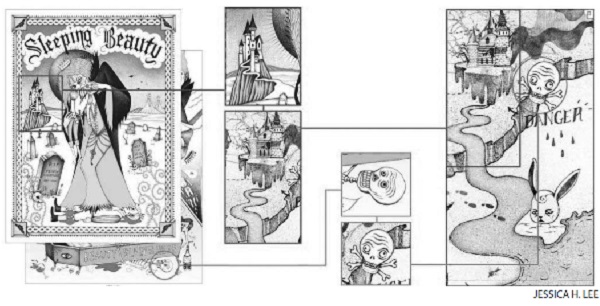 A Korean illustrator based in San Francisco has alleged that her work was plagiarized in the cover of singer IU’s latest album, “Chat-Shire.”

Jessica H. Lee wrote in an article that the album cover and accompanying artwork were similar to her graduate thesis. The article was published Sunday on the U.S.-based blogging platform Medium.

Jessica Lee presented details of her work and the album art side by side, pointing out that several of the same motifs appear in both, such as a castle, road, skull, spiderweb and cliffs. The two illustrations also have similar color schemes.

But the links between the two illustrations go further back. Jessica Lee told the Korea JoongAng Daily via email that the album artwork illustrator, also surnamed Lee, had contacted her in 2012 after she completed her master of fine arts degree in illustration at the School of Visual Arts in New York.

“She really liked my graduate thesis work, which were a series of posters on fairy-tale characters, and she wanted me to sell them on a site she ran or managed where illustrators sold their artwork as posters,” she wrote.

They subsequently met once in Korea, and Jessica Lee gave the illustrator some posters of her art as gifts, “which are the same artwork she later referenced for IU’s album cover,” she added.

When Jessica Lee contacted her about the album cover, the illustrator “acknowledged that she took inspiration from my work for the ‘overall tone and manner’ of the illustration,” she wrote in her article. “However, when I showed this to other illustrators, they thought the similarities are too close to just be a ‘tone’ or ‘manner.’”

She ended the article saying that she hopes to “raise awareness and get companies to talk more about their design inspirations and give credit to the network of hardworking artists that created the work.”