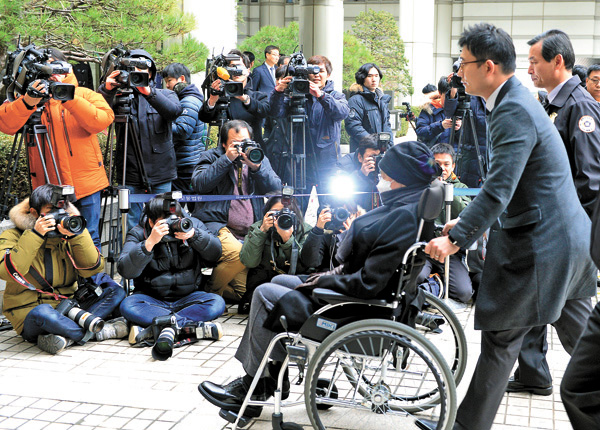 CJ Group Chairman Lee Jay-hyun is escorted to the courtroom in a wheelchair in front of photojournalists at the Seoul High Court in Seocho, southern Seoul, on Tuesday. [NEWSIS]

The Seoul High Court sentenced CJ Group Chairman Lee Jay-hyun to two and half years in prison and a 25.2 billion won fine for tax evasion and embezzlement in a retrial on Tuesday.

The surprising decision was a departure from the Korean justice system’s tendency to be lenient on business tycoons.

The ruling came after the Supreme Court requested the lower court review a previous sentence of three years in prison and 25.2 billion won in fines.

CJ Group, the retail and entertainment conglomerate, said Lee will again appeal to the Supreme Court. The company now faces a prolonging of the leadership vacuum that has led to the withdrawal of projects and slashed investments.

The high court cited the importance of social responsibility and the rule of law.

“Corporate groups should fulfill the social responsibilities that come with their influence in the economy,” said Judge Lee Won-hyung in his ruling.

“[Lee] evaded taxes for a long time, using a network of senior employees. It resulted in serious blows to the fairness of our taxation system and negatively affected the perception of taxpayers.”

The court explained the reduced sentence came because it had dropped an additional charge of breach of trust.

Since the Supreme Court referred the case back to the lower court in September, some in business circles hoped the ailing Lee would receive a suspended sentence at retrial.

CJ said that it didn’t see such a decision coming.

“It is disheartening to see that Lee is given a prison sentence even though his health condition would not allow him to properly serve the terms,” CJ Group said in a statement.

“It is true that we [CJ Group] will face tremendous difficulties in managing the company. But we will come up with measures to weather this situation.”

“The ruling may undermine the morale of people in business circles who try to overcome economic headwinds with more investments and jobs,” said Lee Sang-yoon, a director of the group

After undergoing a kidney transplant, Lee has suffered from various kidney problems and the neurological disorder Charcot-Marie-Tooth, which causes muscle weakness and pain.

After Lee stepped down that year, CJ’s investments sharply declined.

Entering this year, the group refrained from laying out investment and employment plans because of Lee’s absence.

Sohn Kyung-shik has been filling in for the chairman.