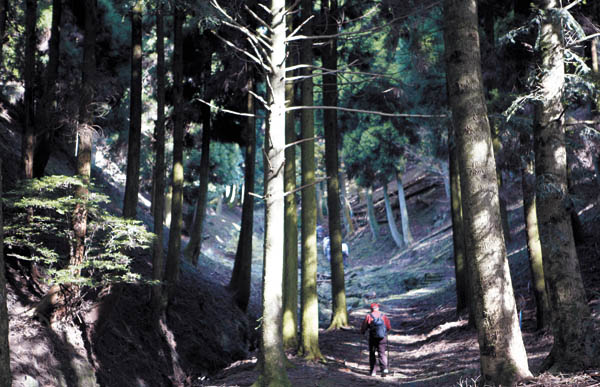 KURUME, Japan - A trip to Kyushu in winter conjures up images of soaking in a hot spring in Beppu or Yufuin and then having kaiseki (traditional course meal) at a ryokan (traditional-style inn).

Korean tourists head to the southernmost areas of Japan’s main islands when they want to relax in a hot spring. And Kyushu is the closest to Korea among Japan’s four major islands, so it takes only 80 minutes from Incheon International Airport and 50 minutes from Gimhae Airport to fly to Fukuoka Airport.

But the number of Korean tourists to Kyushu has declined drastically since the earthquake and tsunami hit Japan in 2011. The tourism business in Kyushu needed a new strategy to reverse the trend. As a result, Kyushu launched a new attempt to attract Korean visitors with a completely different type of tourism: walking trails.

In Korea, the Jeju Olle trails created a boom in trail walking since its first opening in September 2007 on Korea’s southernmost island. Olle is a word in Jeju dialect that means a narrow alley that connects a house to the road.

The Jeju Olle trails changed the way Korean tourists enjoy Jeju, from sightseeing and visiting major tourist attractions to walking along the trails and experiencing the island with the entire body. About two million people visit Jeju annually to go trekking on 27 Olle courses.

Riding on this trend, the Kyushu Tourism Promotion Organization decided in 2011 to import the Olle trails from the Jeju Olle Foundation, in hopes of attracting more Korean tourists who want to walk along new trails in a foreign country.

Suh Myung-sook, president of the Jeju Olle Foundation, and Hideo Ooe, director of the Kyushu Tourism Promotion Organization, signed an agreement to introduce Olle walking trails in Kyushu in August 2011. With this partnership, Kyushu Olle was born. On the Kyushu Olle trails, travelers encounter the same signposts and arrow signs as on the Jeju Olle trails.

The Jeju Olle Foundation inspects and certifies the Olle trails in Kyushu, and in return the foundation receives 1 million yen ($8,143) per year from the Kyushu Tourism Promotion Organization in royalties for this cultural product. 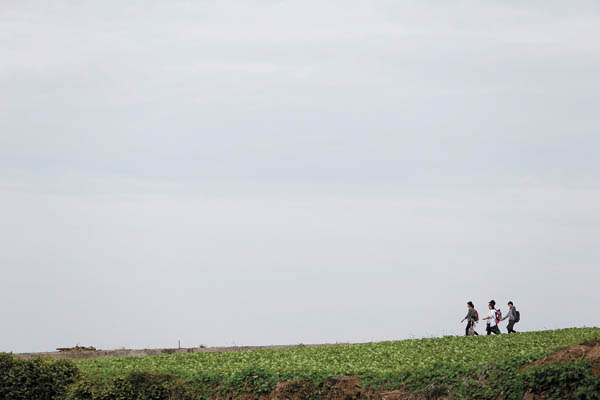 Since the first Kyushu Olle trail, the Takeo course, opened in February 2012 in Saga Prefecture, two to four new trails have opened annually. And with the total number of Kyushu Olle trails now at 17, the total length of all the trails stretches over 198.3 kilometers (123.2 miles).

So trekkers can experience the areas in a very different way, far from the tourist attractions. Walking on narrow path in a remote village or forest in a foreign country is a unique experience that cannot be found in conventional types of tourism. On the Olle trails, travelers encounter nature and local residents at every turn. 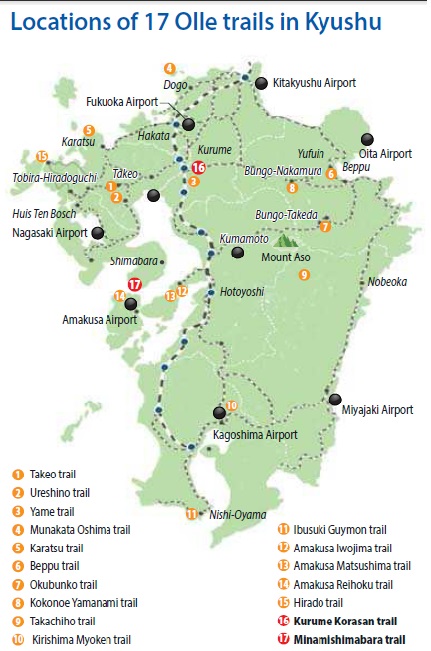 According to the Kyushu Tourism Promotion Organization, 162,490 travelers have walked on the Kyushu Olle trails during the three years and six months from March 2012 to September 2015. Korean tourists accounted for 64 percent of the walkers, or 104,110 people, while Japanese tourists accounted for 36 percent, or 58,380 people. In other words, Kyushu’s attempt to attract Korean tourists with Olle trails has attained a measure of success.

The Kurume Korasan trail runs along Mount Kora, which sits in the southern part of the city of Kurume in Fukuoka Prefecture. Kurume is just 35 kilometers away from Fukuoka, the gateway for foreign visitors to Kyushu. The city is a major transportation hub as several major highways, expressways and railways pass by. Therefore, travelers can easily access the new Olle trail.

The trail starts from JR Kurume Station, climbs up and down Mount Kora, past Kora Shrine, and ends at JR Mii Station. It stretches over 8.6 kilometers along a footpath, and it takes about three to four hours to complete the trail. The soil bed on the trail was so soft that I felt less fatigued, even though the slope was somewhat steep.

Before climbing up Mount Kora, a big old stone torii (bird abode) called Ishizukuri welcomes visitors to the mountain. Torii are traditional Japanese gates often found at the entrance of shrines or other sacred places. 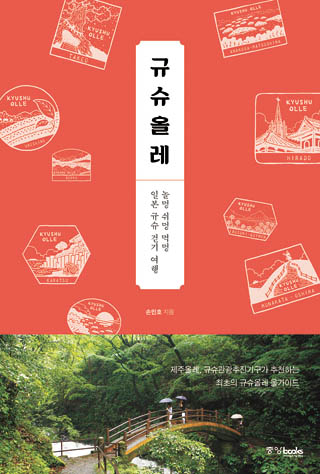 As I expected from the torii, I encountered several Shinto shrines - Okumiya Shrine, Kora Shrine, Myouken Shrine, and so on - while walking along the trail. Among the shrines that dot the mountain, Kurume city tourism officials boast of Kora Shrine, which was originally built in the fifth century. The current shrine, designated as a national Important Cultural Asset in Japan, was rebuilt in 1600.

But I will remember the trail because of the magnificent forests I walked through.

First, I passed by a rare bamboo grove. The colors green and gold appeared alternately in the joints of the bamboo. Such bamboo groves are found in only four places in all of Japan. The rare bamboo grove was even designated a national natural monument.

After walking on the trail following blue and red arrow signs for an hour, a magnificent forest of Japanese cedar trees greeted the panting trekkers. I was overwhelmed by the forest, as the view reminded me of forest scenes from “Princess Mononoke,” a 1997 historical fantasy anime film directed by Hayao Miyazaki. I felt like I was walking into the forest scene of the anime.

On the way to the peak, trekkers walked through the Kurume Azalea Park, where 61,000 specimens of 100 kinds of azaleas are planted on the hillside. Azalea flowers were not in bloom at the time, but I was sure the scenery would be spectacular in spring when all 61,000 azaleas flower.

The trekkers then walked down a downhill trail through a splendid bamboo grove. Walking in a bamboo grove felt exotic, as the bamboo stalks were much thicker than the ones in Korea.

The Minamishimabara Olle trail was built in the countryside, where travelers cannot easily access. It takes about four hours by car from Fukuoka Airport to the city of Minamishimabara. Though the journey to reach the trail is long, the trail itself is easy and smooth. It takes about three hours for a traveler to complete the 10.5-kilometer course.

The trail starts from Kuchinotsu Port, goes round the Hayasaki Peninsula, and ends at the museum of history and folklore. While walking along the course - even when on the mountain - trekkers can enjoy the view of the Ariake Sea.

Descending a hilly area, I encountered broad fields filled with green cabbage lettuces. The soil of the fields was red. The contrast of red soil and green leaves left a strong impression on a stranger.

A man-made reservoir was created in the 16 century to irrigate the red-soil fields. From the hilly areas, I could look down at the Ariake Sea.

Down on the coastal path, I saw a fishing village, a small port, fishing boats, lighthouses, rough rocks on the seashore, and a colony of dragon trees, which looked like mangroves. I could appreciate all the aspects of seaside views on the second half of the trail.

The Ariake Sea is an inland sea. In the strait between the Hayasaki Peninsula and the Amakusa Islands on the other side of the sea, the currents are fast and rough. Schools of dolphins frequently appear in the strait. Dolphin-watching on ferry rides from Kuchinotsu Port is one of the region’s main attractions.

At the last point of the trail, the museum of history and folklore welcomes visitors. There, the visitors can learn about rise and fall of Kuchinotsu Port and a sad local Christian history.

Kuchinotsu Port used to be a center of trading with European countries 450 years ago. Merchant vessels from Portugal and Italy sailed in and out of the port. Western missionaries landed at the port, and the port village became a starting point for the spread of Christianity in Japan. The irony was that I could not see any church or even a cross in the village.

The port enjoyed prosperity after the Meiji Restoration in 1868 as an export site. Coal from the Miike Coal Mine was shipped out overseas through the port. Girls from poor households were mobilized to load coal onto freighters. Some of them were stowed away in the bilge of cargo ships and smuggled to China and Southeast Asian countries. The girls were called karayuki-san, which meant Ms. Gone Abroad. The port was shut down in 1967 as a trade port after Miike Port was built to export coal.

He arrived in the port in 1579, disembarking from a European ship. The next year, he founded the first Western-style school in Japan to educate students who wanted to become Jesuit priests. He planned the Tensho embassy, the four teenage noblemen sent by a Japanese Christian lord to the pope and the kings of Europe from 1582 to 1590. Many people in Kuchinotsu Port converted to Christianity. In 1587, Japan’s most powerful ruler, Hideyoshi Toyotomi, suddenly issued an edict expelling missionaries and began persecuting Christians.

And the region harbors another sad story: the site of Hara Castle. It was the last ferocious battlefield of the Shimabara-Amakusa Rebellion. The site is a 20-minute drive from Kuchinotsu Port. It looks like a small mound at first glance, but at one point 37,000 peasants, united by their shared Christian faith, were besieged in the castle by 120,000 of the shogun’s soldiers, and all - including women and children - were slaughtered. The rebellion lasted for 88 days. Hara Castle was completely demolished after that, but archaeological investigation has revealed countless human bones, crucifixes and medals.

Other Olle trails on Kyushu

Son Min-ho, a JoongAng Ilbo travel writer, walked all 17 Kyushu Olle trails. He even wrote a traveler’s guidebook on 15 of the trails. In the book, he introduces features of each trail and the historical background of the region.

The guidebook gives practical information on restaurants and ryokans. If you want to experience both the trekking and hot springs, he recommends the Takeo, Beppu, Kirishima Myoken and Ibuski Guymon Olle trails. If you want to learn about Japanese history, he recommends the Takachiho and Munakata Oshima (mythology); Yame (ancient history); Karatsu (Japanese invasions of Korea); Amakusa and Hirado (persecution of Christians); and the Kirishima Myoken (Sakamoto Ryoma) trails.

“As a travelogue writer for a decade, I think walking is the most honest way of traveling because I cannot take one step forward unless I move my whole body,” he wrote in the preface of the book.