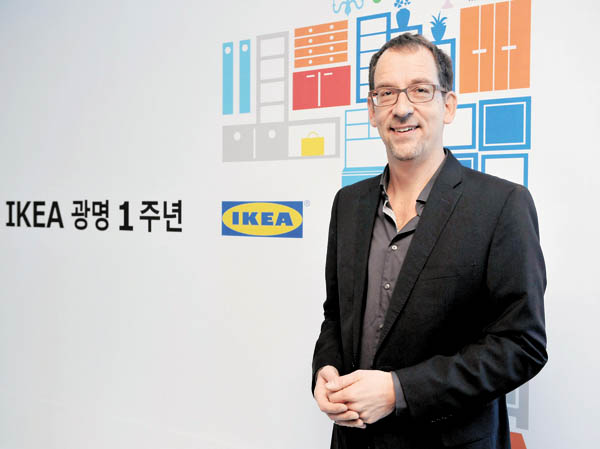 Swedish home furnishing giant Ikea plans to invest 1.2 trillion won ($1.02 billion) to build five more stores across Korea by 2020 due to the success of its inaugural store in Gyeonggi, the company announced on Wednesday.

The plan - which follows the opening of its first store in Gwangmyeong last year - is an upgraded initiative from a year ago when the company said it would expand to four more branches.

Andre Schmidtgall, country retail manager at Ikea Korea, said the latest decision is due to the great performance of the inaugural store that has generated 308 billion won in sales throughout this year.

“Based on the success of the Gwangmyeong store, we learned that it is attracting people living far away,” the chief manager said, “[To meet the growing demand,] we decided to open more stores.”

Two new Ikea outlets will open in Seoul, including in Gangdong, or eastern Seoul, whereas Gyeonggi, Daejeon and Busan in South Gyeongsang will each have a new Ikea store, he said.

A total of 6.7 million people visited the first Ikea, with 606,000 registered Ikea family members, after the store flung its doors open last December.

He added that reception and sales results in Korea are “far better than expectations.”

The branch’s first-year revenue placed the Swedish retailer as the third-largest furniture player in the country after Hanssem and Hyundai Livart.

With more stores scheduled to open in the coming years, the sales gap with local players is expected to narrow.

One of the new stores will be located in Goyang, Gyeonggi, in the second half of 2017, measuring 51,000 square meters, the company said.

When asked whether Ikea Korea will feature new services such as online malls and pickup services, he said that the Korean unit will be focused on opening stores in the beginning phase rather than introducing new features.

“Ikea is generally testing different formats and services in countries where it already has stores,” Schmidtgall said.

Despite its success, Ikea has also came under fire.

The government is reviewing whether the Swedish retailer should close twice a month as other big retailers and supermarkets do to protect small and midsize vendors and merchants.

Schmidtgall noted such regulations are unique to Korea, but he added that Ikea works with public officials at different levels to deal with the issue.