Debt rises to 61.81 million won for each household, study shows

Debt rises to 61.81 million won for each household, study shows

Korean household debt growth surpassed asset increase this year due to encouragements by the government to buy homes with cheaper loans, a government report showed on Monday.

According to an annual report on households’ finance and welfare conditions by Statistics Korea, the Bank of Korea and Financial Supervisory Service, the average household was 61.81 million won in debt as of late March of this year, up 2.2 percent compared to the year before.

Financial loans accounted for 69.9 percent, or 43.21 million won of the total debt, which surged 4.9 percent on-year. About 57 percent were mortgage loans, and the rest was loans taken out on personal credit.

The report also showed around 64 percent of the total Korean households possessed debt. Households spent about 24 percent of their earnings on paying back debt, slightly up from 20.3 percent in the previous year. 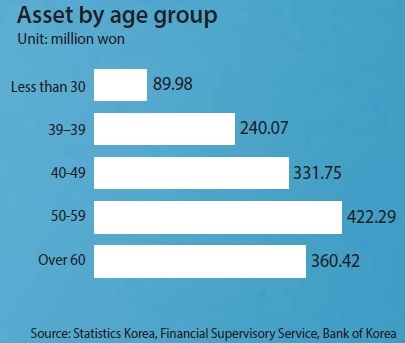 While household debt did rise, so did assets during the same period.

The data also showed that an average Korean household held 342.46 million won worth of assets in 2015, up 2.1 percent from the previous year. Each household earned 47.67 million won per year on average, 2.3 percent during the same period. Disposable income hit 39.24 million won, up 2.7 percent on-year.

About 68 percent of all households had assets under 300 million won. And about 4 percent had more than 1 billion won.

By asset type, 26.5 percent of assets were in the form of financial holdings, while real assets, including properties, accounted for 73.5 percent of the total household assets, data showed.

The latest report found about 70 percent of all households felt their debts were a burden. About 7 percent of them said they feared not being able to reduce debts. About 11 percent worried that their debt could rise further next year.

“As much as household assets increased thanks to higher housing prices, financial debt including mortgages did rise, offsetting the growth in assets,” said Jeon Kyung-bae, head of statistical investigation at the Bank of Korea.

The Ministry of Strategy and Finance said that it is encouraging to see the structure of household debt has slightly improved, although the total debt rose.

“Thanks to the financial authority’s guidelines, more debts required the borrowers to pay back both the principal and interest simultaneously, which will help prevent debt from getting out of control,” said Kim Jin-myeong, a director at the ministry in a separate report.