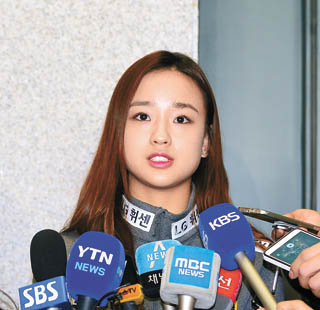 Rhythmic gymnast Son Yeon-jae said on Tuesday that she doesn’t feel pressured to get a medal in the 2016 Summer Games in Rio de Janeiro, which is likely to be her last Olympic event.

Son, 21, arrived in Korea on Tuesday after a month-long training session in Russia.

“These days, I try to think I should put my best forward so I won’t regret it later,” she said at Incheon International Airport. “For years, I have been pressured to get a medal. But now, I’m putting those thoughts behind me and will enjoy the training.”

Son became a star after she finished fifth in the London Olympics four years ago, which was the highest finish in Korean rhythmic gymnastics history. The Yonsei University student last year won the gold medal in the Incheon Asian Games and topped the Gwangju Universiade this year.

Son said that she has been focusing on weight training in order to improve her stamina after the World Rhythmic Gymnastics Championships in Germany, where she finished in 11th place in September.

She added that she is also working on different performances by changing the music on some disciplines. For example, in ribbons, she is using classical music as a background, but now she is practicing with tango music.

“I want to show a different performance. Next year, ribbon will be one of them,” she said. “It’s difficult to practice in faster music, but it’s fun.”

She will spend the holidays in Korea before going to Russia again next month.