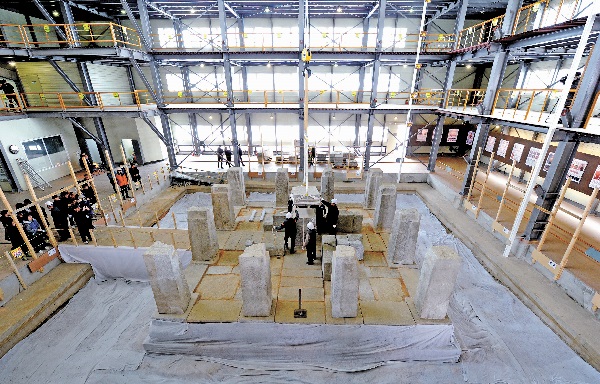 The central pillar of the stone pagoda at the Mireuk Temple Site is placed on Dec. 16. The restoration of the largest and oldest stone pagoda in East Asia began in 1998 and will be completed in July 2017. [CULTURAL HERITAGE ADMINISTRATION]

The workers showed extra caution as they lowered the center pillar of what would be the newly restored stone pagoda at the Mireuk Temple (or Mireuksa Temple) Site.

The center pillar alone weighed about 1 metric ton (1.1 tons), and the stonemasons used a crane to place it in its original spot.

The placing of the center pillar, opened exclusively to Korean journalists on Dec. 16, in fact marked a pivotal moment in Korean history.

The stone pagoda, Korea’s National Treasure No. 11, was built in 639 during the Baekje Kingdom (18 B.C. to A.D. 600). It is considered the oldest and the largest stone pagoda in existence today in all of East Asia.

Exactly 100 years ago, when Korea was under Japanese colonial rule (1910-45), the Japanese used concrete - which was then quite a new type of architectural material - to shore up the western face and areas surrounding the pagoda, which had partially collapsed several years before that.

That’s why for about a century, the precious treasure had a rather peculiar shape, being an elegantly shaped stone pagoda on one side and solid (and even ugly-looking) concrete on the other.

So the event earlier this month marked the beginning of a new era for the monument: A step toward returning it to its original shape from before the 1915 restoration conducted by the Japanese, including removing the concrete.

The latest work on the project comes after Korea’s “Baekje Historic Areas,” which include the Mireuk Temple Site, became a Unesco World Heritage Site in June. The Baekje Historic Areas refer to a group of eight sites located in Iksan, North Jeolla, and Gongju and Buyeo, South Chungcheong, which were important settings during the latter part of the history of the Baekje Kingdom.

Left: A 1910 photo shows the pagoda was partially collapsed. Center: Since a Japanese restoration in 1915, the pagoda has been half concrete. Right: This rendition shows how the pagoda will look after construction is complete in 2017. After much deliberation, Korean authorities decided to restore the pagoda to just before 1915, not to its original state, due to a lack of historical and academic documentation. [CULTURAL HERITAGE ADMINISTRATION, JOONGANG ILBO]

But the restoration does not mean the pagoda will look brand new.

The project, which began 17 years ago and is scheduled to finish in July 2017, is intended to take the pagoda back to just before 1915 - when it had already suffered a partial collapse - not to the year it was built in 639.

In a black-and-white photo dated 1910, the pagoda is seen partially collapsed. In the same photo, the pagoda was six stories high. However, the original number of stories remains a mystery.

And the restoration work will take the pagoda back to how it looked in the photo. Although that may sound quite simple, research by the Korea JoongAng Daily found that there are many implications in the plan.

“Why are we not reconstructing the pagoda to nine stories, as are the wishes of the majority of people of Ilksan?” one reporter from a regional media outlet asked during the press event. 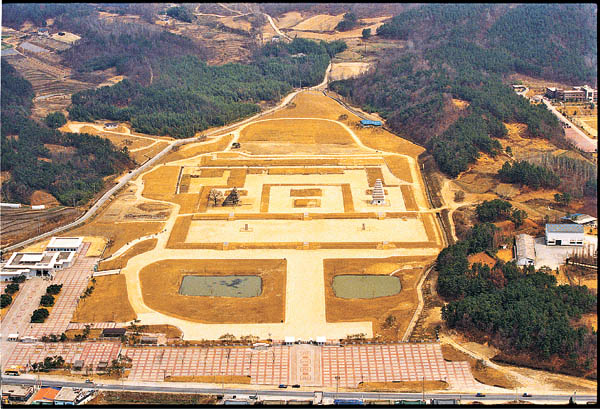 Mireuksa Temple has the rare form of comprising three small temples that make up one temple. The pagoda being discussed here is the western pagoda. [CULTURAL HERITAGE ADMINISTRATION]

In response, Kim Derk-moon, the director of the National Research Institute of Cultural Heritage’s Research Division of Architectural Heritage, said, “There are no historical records that specify how many stories the pagoda was originally, and we cannot reconstruct the pagoda based on an assumption.

“We also cannot reconstruct the pagoda based on the people’s wishes without any academic or historical grounds - more so given the pagoda’s importance in Korea’s and East Asia’s history and architecture,” he added. “I emphasize again that the work is therefore repair and maintenance, rather than restoration and reconstruction.”

For years, debate has been raging over how the pagoda should be restored.

So the next step was deciding how to reassemble the pagoda. Experts as well as the people of Iksan had three choices.

One was reconstructing the monument as a grandiose nine-story pagoda, as it would have been in its early years. It is generally believed based on archeological findings that the pagoda was probably nine stories high when built. The second option was restoring it to a six-story pagoda, as it is remembered in contemporary Korea, by removing the century-old concrete addition and rebuilding the collapsed side to match the intact side. Lastly, the third option was restoring the pagoda to its pre-1915 state by simply removing the concrete and stabilizing the partially collapsed structure with stone. 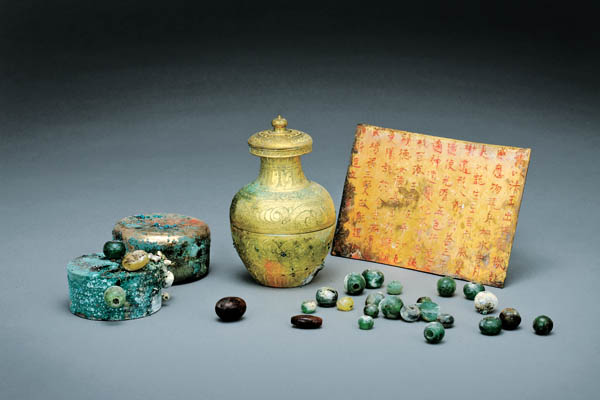 In 2009, archaeologists came across a set of caskets that contained Buddhist sarira. About 99,000 relics were uncovered, making the finding one of the most important discoveries in Korean history. [JOONGANG ILBO]

In 2011, a group of cultural heritage experts agreed on the third option. But the people of Iksan, and regional media outlets, were not happy with the choice.

Kim and other officials of National Research Institute of Cultural Heritage, however, pointed to another stone pagoda at the Mireuk Temple Site as a cautionary tale.

In a design never before seen at the time in East Asia, Mireuk Temple consisted of three temples, according to an archaeological excavation that took place in the 1980s. Each temple, or zone, had a stone pagoda and a main building.

In 1992, the authorities reconstructed the eastern stone pagoda, of which only the foundation remained. The newly built pagoda was nine stories high, based on calculations made using the foundation and other remaining pieces found nearby.

But the reconstructed pagoda is widely considered a failure, even mocked by some as a “20th-century pagoda.”

Not only is its nine-story structure based on assumptions, but the unnaturally white and machine-cut granite used in the construction gives it an artificial, brand-new look that many people say clashes with the seventh-century Buddhist temple with such a rich history and folklore.

Officials emphasized last week that they do not wish to make the same mistake with the western pagoda. “We must remember that the eastern pagoda isn’t even designated a state treasure,” Kim said. “There is also a possibility that Unesco could take back the World Heritage Site designation if we push ahead with reconstruction that lacks authenticity.”

Experts note that just like Mireuk Temple itself, the design of the western pagoda is like no other.

“The pagoda is made of stone, but its design was the type seen in wooden structures,” Kim explained. “For instance, the pillars on the outside are noticeably taller. This made the roofs have upwardly curved eaves, just like those you would see in hanok [traditional Korean wooden houses].”

The pagoda was also unique in the way it was assembled, with pieces fitting together like stacking blocks, Kim said, adding that this technique is usually found in wooden structures. The pagoda is the only known case that embodies the techniques of both stone structures and wooden structures.

The pagoda is also precious because in 2009 - while the dismantling process was underway - experts came across a set of caskets that contained Buddhist sarira. From the caskets, about 99,000 relics have been uncovered, making the finding one of the most important discoveries in Korean history.

It was from the caskets - which is pretty much like a time capsule from 1,500 years ago - that Koreans learned the specific year in which the temple was built.

Just as the pagoda combines features of stone and wooden structures, the technique that went into the 17-year-old restoration work combine both old and new techniques.

In a makeshift facility next to the site of the pagoda, workers were busy using chisels - as well as making the chisels.

“We are making chisels in a traditional kiln,” a stonemason explained. “And we removed the concrete manually using these chisels, not resorting to any machinery.”

Experts considered many ways to remove the concrete, and decided that the best way - or the way that would cause the least amount of damage to the pagoda - would be to do it manually.

The accumulated concrete removed from the pagoda over the past 10 years weighs more than 185 metric tons, Lee Cheol-gyu, a spokesman for the Cultural Heritage Administration, explained.

And the pagoda will be rebuilt with “self-implant,” so to speak, as an analogue to plastic surgery.

Fallen stones from beside the pagoda will replace concrete in the reconstruction. Ancient Koreans considered the pagoda precious and kept the stones that fell off it, piling them up right next to the pagoda.

It seems the pagoda had been crumbling for many years. An 18th-century record states that it was partially collapsed and only seven stories high. It also says that “a farmer climbed the pile of stones and took a nap.”

These same stones will be used in the reconstruction. “About 700 pieces of stone will be used to replace what used to be 185 tons of concrete,” Kim Hyun-yong, a researcher at the National Research Institute of Cultural Heritage, said.

In total, experts are aiming to rebuild the pagoda using 62 percent original stones and 38 percent new stones. The new stones will also obtained from a nearby location, so they will be similar to the original stones.

In order to use the original stones as much as possible, the workers resorted to using various methods. “We inserted epoxy resin into the original stones to fill in the cracks and strengthen it. We also painted it with acrylic paint to make less evident the borderline between the original and new parts,” Lee Dong-sik, also from the research institute, explained.

Once the repair work is complete in July 2017, the pagoda, which used to be 12.5 meters (41 feet) tall, will stand 14.6 meters tall, with one additional layer placed on the top to ensure the top part doesn’t fall apart.

Mireuk Temple is famous for the tale that says it was built by King Mu (unknown-641) of Baekje and his loving wife, Princess Seonhwa.

The dramatic, romantic story of how the two met is also famous, passed down through the generations via the old Korean folk song “Seodongyo.”