Rep is first to be convicted for taking book money

Rep is first to be convicted for taking book money 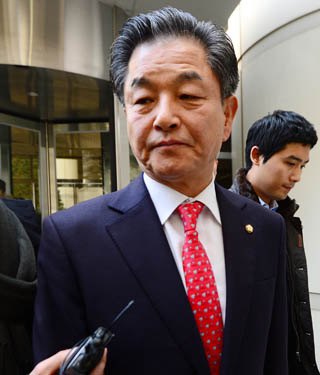 Lawmaker Shin Hak-yong of the main opposition New Politics Alliance for Democracy was sentenced to 30 months in jail for taking money illegally Tuesday, including bribes from two different groups, and fined 31 million won ($26,462).

The court also ordered him to forfeit an additional 213 million won.

One of the bribes was in the form of sales of a book authored by Shin. The Seoul Central District Court’s ruling was the first time a lawmaker was convicted of taking money at a book publication party.

The jail term is heavy enough for Shin to lose his seat. He said he will appeal.

In Korea, politicians often raise money at “publication parties” for books authored by them. Bulk purchases of the book have never been deemed political donations before Tuesday.

In September 2013, Shin accepted 33.6 million won from the Korea Kindergarten Association at a book publishing party. He was accused of being bribed to change regulations on private kindergartens.

“It is difficult to see the publication party as a means of actually selling the book,” the court ruled in Tuesday’s verdict. “The figure of 33.6 million won is too large to regard as money shared between acquaintances.”

The court presented guidelines on publication party payments to be considered bribes. The guidelines were: if money is given systematically by a particular group; if the recipient has received prior information of the donation; if there is a favor requested in return; if the payment is excessively large.

Aside from the payment from the kindergarten association, Shin was indicted in September 2014 for receiving bribes from Seoul Arts College Executive Kim Min-Seong. He was convicted Tuesday of accepting 15 million won from Kim in December 2013 and January 2014.

In January, Shin was indicted on charges of taking parts of the salaries of four of his aides.

“Recently, Shin has announced he will drop out of next year’s general election campaign,” an aide to Shin said.