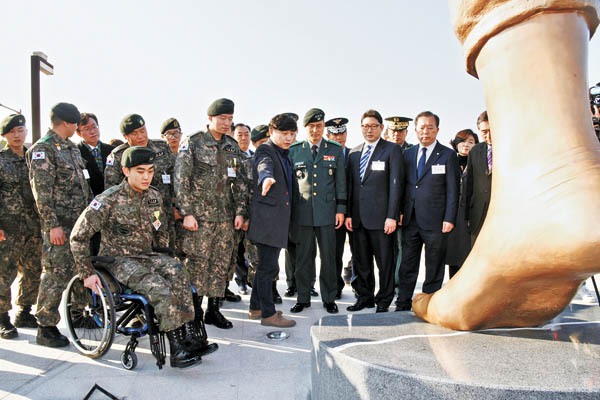 Hyosung Group President Cho Hyun-joon, fifth from right, at the unveiling ceremony for the “The Foot of Peace” sculpture at Imjingak Peace Park in Paju, Gyeonggi. [HYOSUNG GROUP]

The Ministry of National Defense and Hyosung Group, one of the nation’s major chemical companies, held an unveiling ceremony for a sculpture named “The Foot of Peace” at Imjingak Peace Park in Paju, Gyeonggi, on Wednesday. The sculpture commemorates the soldiers who were maimed in a land mine explosion at the border in August.

Cho Hyun-joon, president of Hyosung Group, and 1st army corps commander Kim Yong-woo attended the ceremony along with Staff Sgt. Kim Jung-won, whose right leg was amputated below the knee, and Staff Sgt. Ha Jae-hun, who had both legs amputated after the explosion.

Kim Jung-won was discharged from the VHS Medical Center earlier this month after going through nearly two months of treatment and rehabilitation. Ha is still being treated at the medical center.

A total of eight soldiers who were involved in the operation with Ha and Kim received the Order of National Security Merit, Gwangbok Medals, at the ceremony. Presidential citations, Minister of National Defense citations and Army Chief of Staff citations were given to six other members of the team.

“The sculpture commemorates soldiers who try as hard as possible in the front line in order to protect the nation,” Cho said on Wednesday.

Hyosung sponsored the ceremony held on Wednesday and provided 200 million won ($170,000) for the work. The sculpture, made by artist Wang Kwang-hyun, is intended to symbolize revitalized feet crossing the demilitarized zone peacefully. Wang used a detonator of a 155-milimeter (6-inch) shell, which the army fired after the mine explosion in August.