Students see the human side of a conglomerate

Students see the human side of a conglomerate 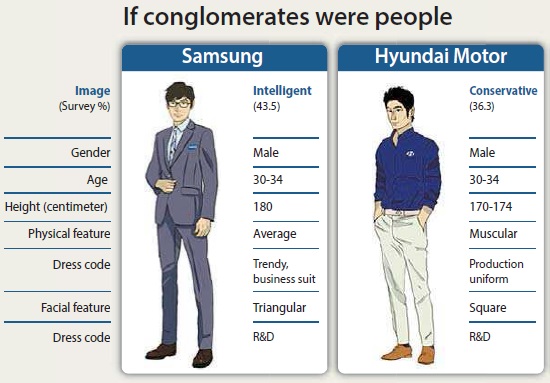 What would Samsung Group look like if it was a person?

According to a group of college students, the individual would be a male in his early 30s, about 180 centimeters tall (5.9 feet), dressed in a business suit and working in the research and development department. He would be intelligent, authoritative and cool-headed.

The college students saw conglomerates that specialize in consumer goods and service businesses, such as cultural contents and media, as female. Such were CJ and Lotte Group. 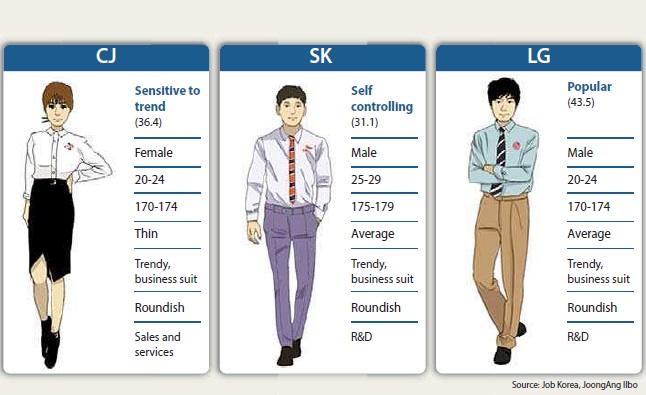 In the case of Hyundai Motor the image of a conservative male was strong, with 92.6 percent of the students visualizing the leading automaker as a well-built male dressed in production uniform.

SK and LG were viewed as a unisexual person that could pass off as either male or female with sophisticated looks. Still the image of a young male in his late 20s or early 30s was slightly higher.

The biggest factor in determining the image of a conglomerate was the CEO of the company as picked by 38.2 percent of the poll. The second deciding factor or 36.3 percent pointed to the core business portfolios, whether it was heavily involved in IT or manufacturing.

The survey was conducted from Nov. 24 to Dec. 5 and was participated by 952 female and male university students attending four-year colleges in Korea.