Miracle Mop inventor at the center of new movie, ‘Joy’

Miracle Mop inventor at the center of new movie, ‘Joy’ 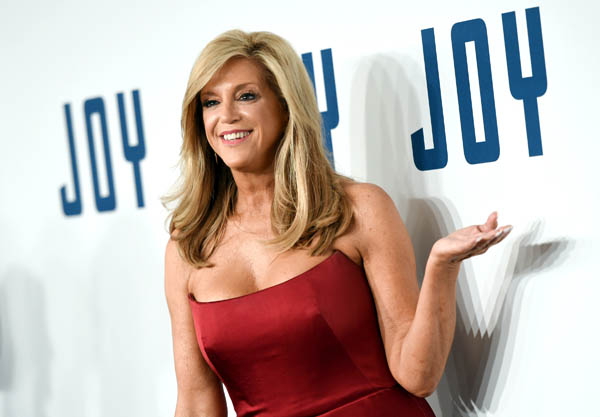 NEW YORK - So then there was that time that Joy Mangano, “Miracle Mop’’ inventor and home shopping entrepreneur, was sitting at a meeting wedged between Jennifer Lawrence and Robert De Niro. And De Niro leaned over and said: “Joy, I have to talk to you. I have such a great idea for a product!’’

Mangano continues the story, laughing: “And Jennifer is on the other side and she says, ‘Bob, you can’t ask her that. Everybody asks her that!’’’ She won’t say what the product idea was, but allows that when things eventually calm down with the movie, she and Bob will probably get around to discussing it.

Late-night meetings with movie stars - oh yes, Bradley Cooper was there, too - isn’t something Mangano ever envisioned, but life changed a few years back when she got a call telling her of plans for “Joy.’’ The movie, directed by David O. Russell, tells the inspirational tale of a tenacious Long Island mother who could barely support her family and then had one great idea - that self-wringing mop - that launched an empire.

But Mangano, 59, thinks the movie - on which she serves as executive producer - has a much more universal message that applies equally to women and men: “Be courageous to do what you’re passionate about and know instinctively you should be doing, because if you don’t, you’ll never have that achievement that you know is within you,’’ she says.

Mangano sat down last week to discuss her life and the film. The interview has been edited for clarity and length.

Q. How did you first hear about plans for “Joy’’?

A. The telephone rings and it’s a producer [whom Mangano had met years earlier], and he says, ‘Hi, Joy, we’re here because we’re going to make a movie about your life story.’ And then David called, and I remember it was in the afternoon, and he said ‘I just want to talk for a few minutes,’ and when we hung up it was absolutely pitch black out. And that was the beginning of many hundreds of hours of talking. He knows more about me than anybody in the world - I would never need therapy!

What do you think he found unique about your story?

I’ve always had this inner resiliency. I grew up in an Italian family in an era where it was, “When are you gonna get married and have children?” And throughout life, I was always taking care of everyone around me. And through the course of that, I lost ... I think we lose what we ARE. And then to find that again, and to go against all odds and have the courage to keep doing that - I wish everybody could be able to find that space within themselves. I feel like I grew wings when that happened!

The movie is based on you but also some other businesswomen. Is it accurate about your life?

I will say that I SEVERELY inspire the movie. How many women do you know who invented the Miracle Mop?

In the movie, Joy goes to QVC with her mop but it doesn’t sell - until she insists that she herself go on camera to pitch it.

Yes, it was my own determination to say: ‘Put ME on with that mop, and the mop will sell.’

So now you’re making a new version of the Miracle Mop?

Yes and I can promise you, the only thing harder than inventing is reinventing. I was possessed to keep this mop at the original price - $19.95 - and I promise when you see it, you’ll see why I say it should be $50. I’m telling you, you’re gonna sing and dance with this mop.