Start the new year off fresh, and squeaky clean

Start the new year off fresh, and squeaky clean 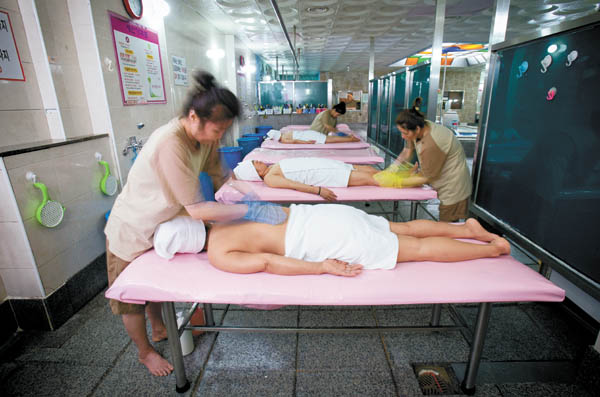 Almost all households are equipped with showers these days, but many Koreans still prefer to go to public bathhouses to get sesin or body scrub service. [JOONGANG ILBO]

At the end of one year and the beginning of another, there are a few rituals that come to mind for many Koreans. One such seasonal ritual is visiting a public bathhouse for a hot bath and a thorough scrubbing.

Visiting bathhouses was common in the 1970s and ’80s when many Korean households were not well-equipped with bathroom facilities.

Today, people can take a shower anytime they want at home, but many people still visit public bathhouses, especially around this time of the year. At public bathhouses they get their bodies polished from head to toe by scrub masters and mistresses, who usually wear black underwear while they work and remove layers of dead skin using coarse towels.

This service is called sesin and it is available at any public bathhouse and sauna, or jjimjilbang.

Nobody knows when Koreans began scouring away dead skin using so-called Italy towels, but it is estimated that the practice started to catch on in the ’70s when public bathhouses began to pop up all over the nation.

Italy towels have nothing to do with Italy, but it is assumed the towels got their name because the sandpaper-like fabric was originally imported from Italy.

Many occupations from the ’70s and ’80s such as bus attendants, telephone operators and typists have disappeared, but sesinsa, or the people who perform sesin, are still around today.

About 30,000 sesinsa are working in Korea, according to industry sources.

The job used to be not taken seriously. Even those who repaired the boilers at bathhouses or shined shoes in stalls at the front of bathhouses sometimes performed the task of scrubbing customers. But the job gained official recognition by the government in 1993 when it was listed as one of the available types of jobs in Korea.

Private institutes that teach the skills of body massage and exfoliation began to open one after another in the mid-1990s.

It costs about 1.2 million won ($1,025) to complete such a course, but people are willing to pay because the sesin job pays well.

“We used to say you could buy a house if you do sesin for two years, and you could buy a small building if you do it for five years. We still earn on average of 3 million won per month,” said a professional sesinsa who wanted to remain anonymous.

Many people in the industry refused to be identified for this story because they think their jobs would embarrass their families.

But they say this is the best job for those who want to start a second chapter in life, because the requirements for becoming a good sesinsa are not diplomas but “physical strength and guts.”

The rental fee for a single scrubbing bed varies depending on the location of the bathhouse, but the deposit at a small public bathhouse located in a residential area starts from 2 million won. The deposit can be as much as 100 million won if the sauna or bathhouse is in a trendy neighborhood with a large floating population, such as Gangnam District, southern Seoul.

And winter is the perfect season to visit a bathhouse and soak in the hot water.

You can simply scrub yourself and give a helping hand to a stranger, then the stranger will scrub your back. Or you could resort to the professionals for a thorough cleaning.

Below is a list of bathhouses and saunas that have the most skillful scrubbers.

Located in Garosu-gil, Sinsa-dong, southern Seoul, Yoo Sauna is for women only. 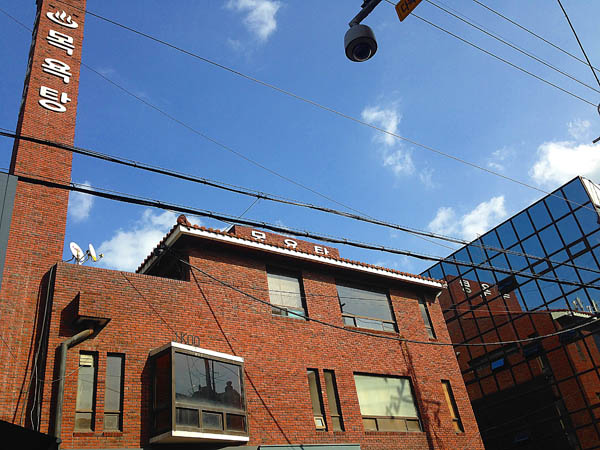 The sauna has been there for 30 years but changed its name to Yoo Sauna in 2010 after renovating its facilities.

It is known as the hangout of actresses such as Kim Hee-sun and Lee Mi-yeon because the sauna has sesin masters who have been in the business for more than 30 years.

Of the four scrub masters, the No. 2 eonni is nicknamed the “heavenly touch.”

Eonni literally means an older sister but it is also widely used as a term of endearment for people working in the service industry.

Unlike its history and reputation, the sauna is small. It has just two hot tubs and two scrub beds. Reservations are a must.

Dragon Hill Spa, located in Yongsan District, central Seoul, is a gigantic seven-story spa that is a popular tourist magnet. 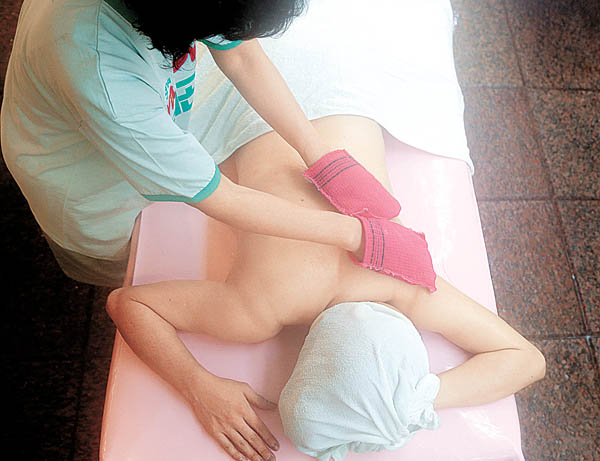 The spa had 1 million visitors last year and 30 percent of them were non-Koreans from the United States, Hong Kong, Russia, China and Japan, according to the spa.

Since it is a well-known tourist spot, the spa has employees who speak English, Japanese and Chinese.

The spa has 14 scrub mistresses on the second floor and they work in pairs in seven shifts.

The spa has standards for sesin and massage, so you can expect similar service from any of the 14 scrubbers.

“I remember people from Indonesia and Malaysia who asked me to scrub their bodies years ago but they didn’t take off their clothes,” said one scrub mistress. “But I see more foreigners who are accustomed to Korean bath culture these days.”
Dragon Hill Spa has a jjimjilbang, a swimming pool and open-air baths.

There is also a special package for female customers that includes both body massage and sesin for 130,000 won.

There are two types of sesin available: A and B course. 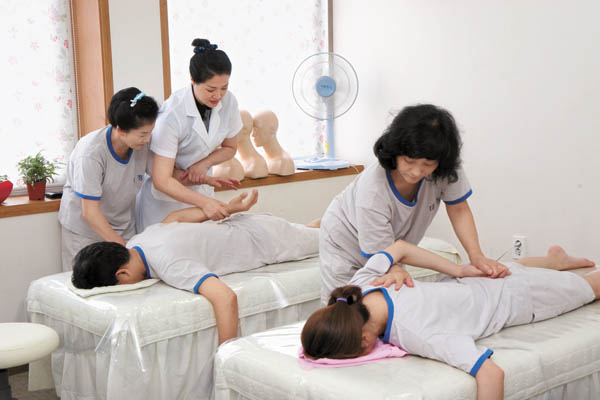 For the A course you get a professional sesinsa, while for the B course you will be scrubbed by an apprentice. The A course costs 10,000 won and the B course 7,000 won.
A complementary facial mask pack with ground cucumber is provided after sesin. 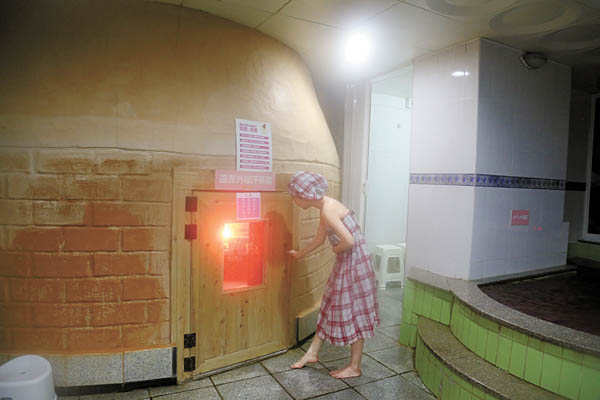 “Apprentices may be clumsy when dealing with customers, but their skill is second to none. Because of this, many prefer to get service from the apprentices,” said Nah Ok-sim, the owner of the sauna.

Since the sauna has up to 700 and 800 customers on weekends who wish to get sesin, a reservation is needed.

Of all the packages, the head-to-toe body massage, which is priced at 30,000 won that lasts for 80 minutes, is the most popular. It includes sesin, too.

After sesin, body scrub masters refresh the skin using hot towels and complete the course with an oil massage.

The sauna has two other branches: one in Pungnab-dong, Songpa District, and one in Hwagok-dong, Gangseo District.

With decreasing numbers of Japanese tourists, many saunas in Myeong-dong, central Seoul, have shut down in recent years, but Myeongdong Seoul Sauna has been in operation for years.

The sauna only accepts women and a majority of its customers are from Japan.

The sauna’s body scrub services are by reservation only.

Three of the body scrub mistresses are in their 70s and have been doing the job for more than 40 years.

“Koreans don’t prefer old sesinsa, but Japanese are different maybe because of their culture which thinks highly of artisans,” said Jang Young-hee, the owner of the sauna.

The sauna uses less coarse towels compared to other places.

Pick-up service between major hotels and the sauna is available upon request.

The basic course, which includes sesin, cucumber facial massage and whole body massage, is priced at 80,000 won. It also includes the hands-on experience of trying on hanbok, or traditional Korean dress.

Five-star hotels such as the Shilla Seoul and the Westin Chosun Seoul all provide sesin service to hotel guests, but they don’t publicly promote it. The Ritz Carlton Seoul is different because the hotel takes great pride in Kim Jong-bin, its body scrub master.

Some guests book nights at the hotel specifically for Kim’s service.

He learned massage techniques in Japan and landed a job in 1984 at the Namseoul Hotel, the predecessor to the Ritz Carlton Seoul.

Of the many customers, Kim named the late famous hairdresser Vidal Sassoon and Luis Figo, the retired Portuguese soccer player, as his most impressive guests.

Kim said that Sassoon visited Korea more than 10 times and he got sesin service from Kim every time he visited.

Figo visited Korea during the 2002 Korea-Japan World Cup and he got a massage from Kim instead of his own personal massage professional.

Sesin service is only available to fitness club members and hotel guests.

A 30-minute session of sesin is 33,000 won including taxes and service charges.

Hanwha Resort Sanjeong Lake Annecy, located in Pocheon, Gyeonggi, is famous thanks to its sesinsa Kim Jin-wook. His name is a pseudonym to protect his privacy.

Kim used to work at the Grand Hyatt Seoul as sesinsa and began to work for Hanwha Resort starting in 2000.

Since he is used to catering to non-Korean customers, his technique is subtle and elaborate and many people fall asleep while getting sesin from him.

“If you get casual sesin first and then soak in spring water, your body absorbs more minerals from the spring water,” Kim recommended.