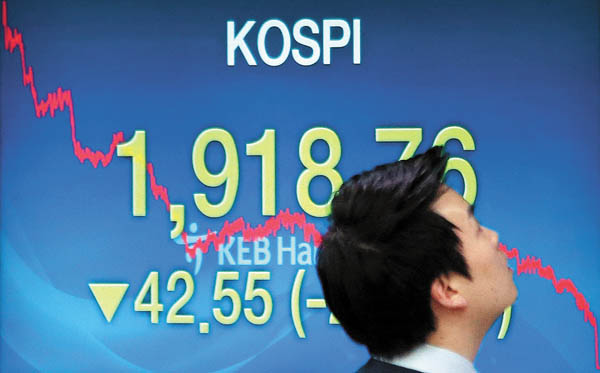 A currency trader on Monday walks by a screen showing the Korea composite stock price index in the foreign exchange room in Seoul. Asian stock markets started 2016 on a weak note Monday, as poor manufacturing data from China and escalating tensions in the Middle East weighed on investor sentiment. [AP/NEWSIS]

The Asian market, as well as Seoul’s main bourse, was heavily shaken on the first trading day of 2016, raising concerns that the global economy could experience another downturn like the one last summer when Chinese stocks crashed.

One of the companies that also saw a significant drop on Monday was Samsung Engineering, whose stock value plummeted 11 percent.

“Because of the slump in the Chinese market, more people sold off their shares,” Lee Kyung-min, a researcher at Daishin Securities, said.

“Institutional investors tend to sell during the beginning of the year because they have already received their yearly dividend payments, and their off-loading sprees will likely continue for a while, which will weaken the market.”

But the Korean market wasn’t the only one to fall victim to the uncertainties sparked by China. Japan’s Nikkei fell 3.06 percent, while Hong Kong’s Hang Seng index and Taiwanese markets tumbled 2.68 percent.

The panic in the Asian market started when the Shanghai composite index spiraled down 6.85 percent. The Shenzhen composite fell 8.2 percent.

The CSI 300, the index of the biggest Chinese shares, dropped 7 percent after 1 p.m., triggering a circuit breaker. Under the new rules, a move of at least 7 percent will shut the market down for the remainder of the day.

The decline in the Chinese market was largely triggered by fears of an economic slowdown.

The Caixin manufacturing purchasing managers’ index decreased to 48.2 last month, below economists’ estimates of 48.9. Last month’s index was 0.4 percentage points lower than the previous month, and the lowest in three months. An index below 50 indicates deterioration.

Rising tensions in the Middle East also jolted the market.

Oil prices rose for a second day as Saudi Arabia and Iran cut ties after the Saudi Arabian Embassy in Tehran was attacked. Futures rose as much as 3.5 percent in New York. West Texas Intermediate for the next month rose from $1.28 to $38.32 a barrel, and Brent for February increased $1.22, to $38.50 a barrel.

The slump may persist due to weak global demand and growing competition from manufacturers in developing nations, Finance Minister Choi Kyung-hwan said on Monday. “Economic conditions are not easy due to low oil prices, U.S. interest rate increases and slowing growth in emerging markets,” he said.

But the bigger problem is that such external and internal uncertainties are expected to continue to burden the Korean stock market.

“The nation’s exports data led the market to start off weak on Monday,” Lim Chae-soo, a researcher at KR Futures, said, “and investors were worried about Samsung Electronics’ poor data.”