In quest for part-time work this year, considering season will be key

In quest for part-time work this year, considering season will be key 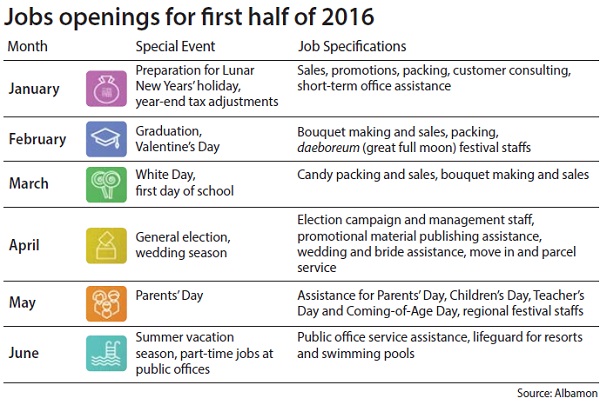 Part-time jobs, known in Korean as alba, used to be mostly reserved for college students trying to pay their tuition fees. But in today’s increasingly competitive job market, part-time work has become a staple across all age groups.

According to Albamon, a part-time job information provider, only 36 percent of the 51,636 applicants that registered on its website as of December 2015 were university students. The rest were unemployed young people, middle-aged people or full-time housewives.

With competition high, Albamon said awareness of coming events is crucial for applicants if they want a shot at landing a part-time gig. To aid job seekers, the site released a job calendar this week marking special events that create part-time work in the first half of the year.

In January, there will be massive job openings in hypermarkets, department stores and logistics service companies as they prepare for the coming Lunar New Year in February. Since this season particularly calls for many weekend jobs or overtime labor, the daily pay is set at around 60,000 won ($50) to 80,000 won. Short-term office work assisting the completion of year-end tax adjustments will also be available in January.

The surge of interest in part-time jobs will continue with Valentine’s Day and graduation ceremonies in February and the beginning of the new school year in March.

April’s general election is expected to create a flood of seasonal jobs as major election campaigns and committees are in need of extra labor. Particularly for the National Election Commission, additional workers for administrative assistance and the overseeing of the overall election process will be necessary.

Demand for wedding assistants and movers also increases in April, because many tend to book their wedding for the spring and newlyweds usually then move to a new house.

Family and community gatherings are common in May, including on Parents’ Day, Children’s Day, Teacher’s Day and Coming-of-Age Day. These events call for many part-timers to sell promotional products and to assist at school or family outings.

In June, major governmental offices nationwide recruit part-timers for administrative work, so applicants should check the websites of regional governments for openings.

For those who can swim well, this time of year can also be a good chance to find jobs at water parks and swimming pools as lifeguards.