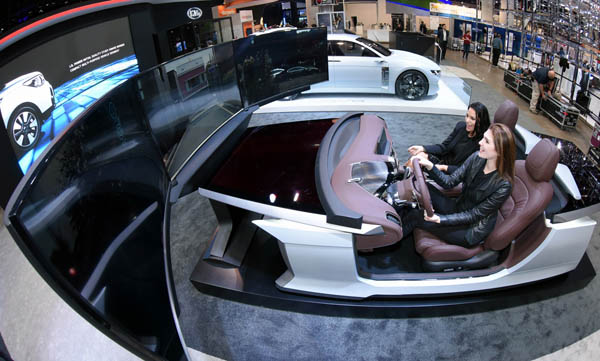 Kia Motors said Wednesday it will roll out fully driverless cars within the next 15 years.

During the Consumer Electronics Show (CES) 2016 being held in Las Vegas, the nation’s second-largest automaker announced its road map for the autonomous driving business, which has recently become one of the core sectors in the auto industry.

The automaker emphasized the launch of Drive Wise, its subsidiary brand that will work exclusively on inventing high-end driverless car technology.

Along with a look into existing technology known as the Advanced Driver Assistance System - which includes a lane departure warning system, lane keeping assist system and automatic emergency braking system - Kia also gave a peek into the features it is working on.

In a 4,800-square-foot showroom, Kia displayed three vehicles equipped with autonomous driving systems, as well as devices that allow visitors to experience the high-end features before they’re released, including virtual reality simulators for the HAD, TJA and UAD.

Under the slogan “Hassle-Free, Delightful Driving,” Drive Wise aims to have partially autonomous cars on the roads by 2020 and completely autonomous vehicles by 2030.

Kia also displayed its Soul electric vehicle in the showroom, which the automaker says it applied all of its autonomous driving tech to run trials.

The company said the state of Nevada, which is known for having strict regulations when it comes to driverless cars, has granted Kia a license to test the new tech installed in the Soul on public roads in December.

The company also introduced “I-Cockpit,” a smart connectivity system that allows drivers to use fingerprint and gesture recognition for vehicle security and operation.

Through the new interface, drivers are able to control their home’s heat and air conditioning systems from their vehicle, and a built-in smart payment system automatically pays for fuel at gas stations and tolls on the road.

“Kia is working on introducing partial and completely autonomous driving tech into its vehicles,” said Lim Tae-won, senior vice president at Hyundai Motor Group. “The first marketable fully autonomous car will not be available in the immediate future, but the innovations presented at this year’s CES clearly show the future direction of Kia in the autonomous driving business.”

The company said competition in autonomous driving technology will get more intense.

Along with Kia, foreign automakers including BMW, Mercedes-Benz, Audi and Toyota have also used this year’s CES to show off their advances in the world’s autonomous driving car market.