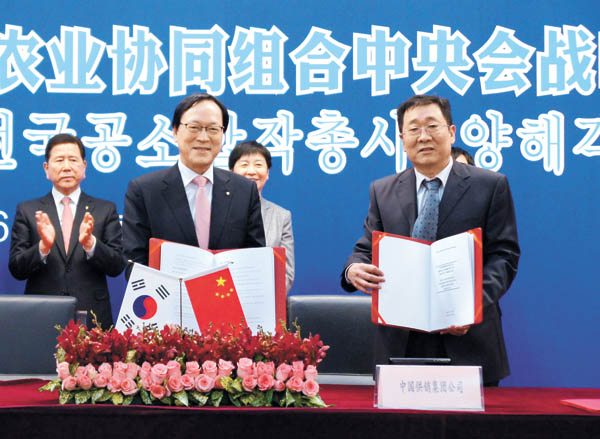 Nonghyup Financial Group announced Wednesday it will make inroads into the Chinese financial market by partnering with a Chinese agricultural cooperative group.

The financial unit of the National Agricultural Cooperative Federation (Nonghyup) said it inked a Memorandum of Understanding with China Co-op Group, an agricultural retail business, to cooperate in the creation of a financial firm in mainland China, on Tuesday in Beijing.

China Co-op is a subsidiary of All-China Federation of Supply and Marketing Cooperatives, a Chinese entity similar to Nonghyup in Korea, with 187 trillion won ($156 billion) in total assets and about 200,000 member companies across the mainland.

The retail subsidiary, set up in 2010, has 16.5 trillion won in total assets, and is the 83rd-largest business among 500 biggest Chinese companies. It is 31st among service firms.

“China Co-op chose Nonghyup because it has deep knowledge about agriculture and skills on the financial business,” the group said in a press release.

Nonghyup will advise on management of the new financial company, provide necessary technology and make financial investments in the new entity.

To fulfill the MOU, the two groups will create a task force and start various exchange programs to promote collaboration, the group said.

“With the conclusion of the Korea-China FTA and Korea’s joining of the Asia Infrastructure Investment Bank, the partnership is meaningful for the financial sector and shows a route the Korean financial industry should take in the future,” said Kim Yong-hwan, chairman of Nonghyup Financial Group.”