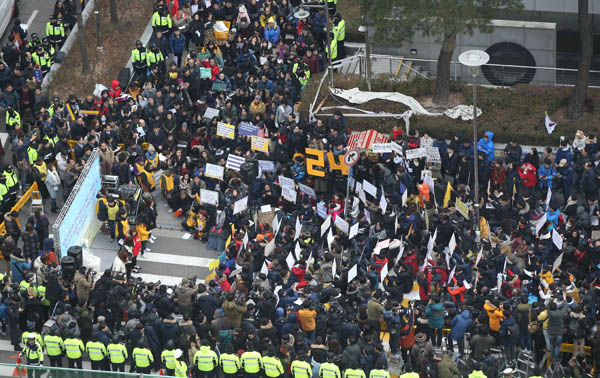 Hundreds of people gather in front of the Japanese Embassy in Jongno District, central Seoul, to participate in the weekly Wednesday rally, which marked its 24-year run this week. [NEWSIS]

Hundreds of demonstrators countrywide set out to the streets Wednesday to mark the 24th anniversary of the weekly rallies that have been held across from the Japanese Embassy in Jongno District, central Seoul, for more than two decades.

The surge came in the midst of soaring public resentment toward a recent agreement between Seoul and Tokyo, which meant to put an end to the long-running dispute over the Imperial Japanese Army’s sexual enslavement of Korean women and girls during World War II, who are euphemistically known as “comfort women.”

The deal promised an apology from the Japanese government as well as a state-backed fund for the Korean victims.

Police estimated that nearly 1,000 people, mostly students and activists, convened in front of the Japanese Embassy for the 1,212th rally, which started at noon. The turnout was higher than at last week’s rally, when some 700 people showed up.

Orchestrated by the Korean Council for the Women Drafted for Military Sexual Slavery by Japan, also known as the Korean Council, a prominent nongovernmental organization that supports the comfort women, the hour-long rallies usually see 100 people in attendance.

“Starting today, the Korean Council will start its own national fund-raising project and financially support the victims,” she continued.

Throughout this week, similar protests condemning the recent agreement between Seoul and Tokyo will be held in more than 30 different locations in 12 other countries worldwide, the Korean Council said.

Seven will be held in Japan, two in Canada, nine in the United States, two in France, three each in Germany and Australia, and one in New Zealand, Taiwan, Austria, Switzerland, England and Hungary.

During last week’s rally, held two days after the landmark deal, the Korean Council said it would upgrade and expand its activities against the Japanese government worldwide through online and offline channels.