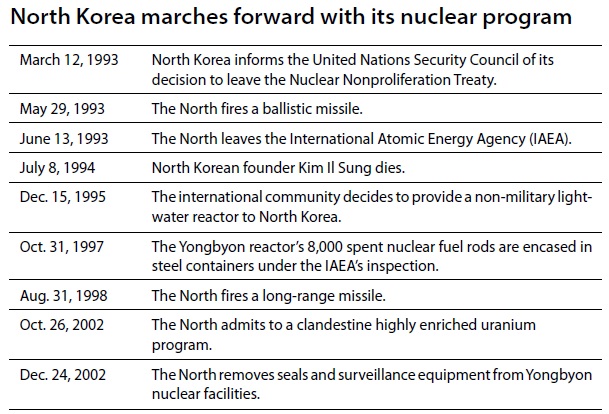 North Korea began its nuclear development program in March 1993, with its decision to walk out of the nuclear non-proliferation treaty. The first nuclear test in 2006 came with the justification that the sanctions adopted by the United Nations Security Council were unfair.

Ahead of the first test, the North also fired a Taepodong-2 missile on July 5, 2006, as the United States celebrated its Independence Day. 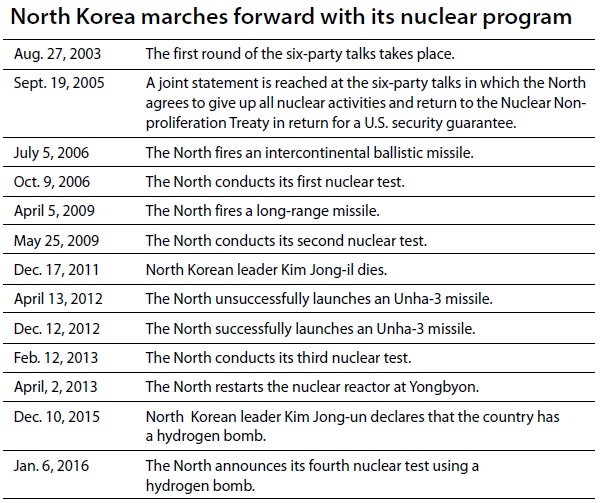 The second inter-Korean summit took place in October 2007, and Christopher Hill, who at the time was Washington’s chief negotiator in the six-party talks intended to denuclearize North Korea, visited Pyongyang in December that year. Hill also delivered a letter from then U.S. President George W. Bush to then North Korean leader Kim Jong-il, the late father of the country’s current ruler.

In 2008, North Korea destroyed a cooling tower at North’s main nuclear plant in Yongbyon. The event was broadcast by international media including CNN.

However, the situation changed after the Barack Obama administration was launched. In May 2009, the North conducted its second nuclear test, before Washington had officially redefined its North Korea policy in line with the change in government.

The third nuclear test was conducted in December 2013, despite China’s strong warnings against it. It was also the first nuclear test conducted under the reign of Kim Jong-un, who succeeded his late father.

Pyongyang’s announcement regarding its four nuclear test remains consistent with the fact that North Korea has worked to continuously bolster its nuclear weapons capabilities over the past 23 years since it abandoned the nuclear nonproliferation treaty.

After the first test, the North said it had safely and successfully conducted an underground nuclear test, and it said the second test had been conducted with a new level of explosive power and control technology. After the third test, North Korea declared that it had used a miniaturized and lighter nuclear device. On Wednesday, Pyongyang claimed that it had successfully carried out its first hydrogen bomb test, declaring that its atomic weapons capability has reached to a new level.