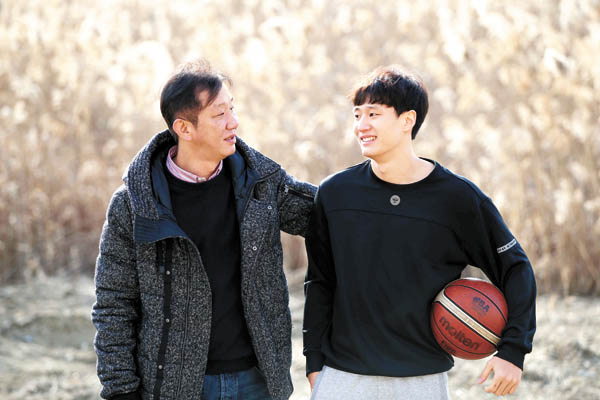 Former Jeonju KCC Egis coach Hur Jae, left, and his first son Hur Ung, who plays for the Wonju Dongbu Promy, pose for a photo on Dec. 29. Ung has earned the most fan votes in the KBL All-Star Game scheduled for Sunday. [OH JONG-TAEK]

When former Jeonju KCC Egis coach Hur Jae heard his eldest son Ung topped this season’s Korean Basketball League (KBL) All-Star Game fan vote, he joked that his son had only won by handing out his business card across the nation.

There is good reason for Hur Jae to envy his 22-year-old son. Although he is regarded as one of the best basketball players in Korea and is nicknamed the “Basketball President,” the senior Hur has never topped the All-Star fan vote.

In the results announced last month, Hur Ung, who plays for the Wonju Dongbu Promy, earned 50,518 fan votes and easily booked a starting spot in the All-Star Game.

“I just can’t understand how Ung suddenly has earned the most votes from fans for the All-Star Game,” the 50-year-old Hur said in an interview with the JoongAng Ilbo on Dec. 29. 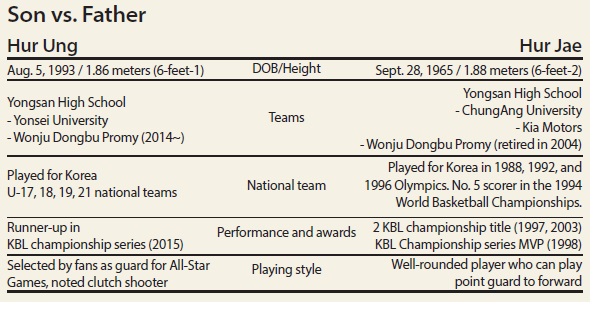 For this season’s All-Star Game, which is scheduled for Sunday at Jamsil Gymnasium in southern Seoul, the teams will be divided by age. Players born after 1988 will play for the Junior Team, while those born before 1988 are on the Senior Team.

The junior Hur, who is in his sophomore KBL season, is regarded as the frontrunner for the Most Improved Player award. The former Yonsei University guard last season averaged only 4.8 points and 1.5 assists per game, but this season, he’s been getting 13 points and 3.1 assists.

With his improved numbers, the Promy are currently tied for fourth in the league.

“Like his father in the past, Ung is a clutch shooter who scores at the critical moment,” said Promy coach Kim Young-man, who previously played with Hur Jae in the 1990s for the Busan Kia Enterprise (now the Ulsan Mobis Phoebus).

For the senior Hur, who quit his coaching job at the Egis last year after leading the team for 10 seasons, the Promy is also a familiar team. He played from 1998 to 2004 and won a championship ring in 2003.

Having worked hard for his success, Hur Jae seems to be most concerned that the fame will go to his son’s head. While visiting a hotel in Goyang, Gyeonggi, on Dec. 29 to see his son and former teammates, he overheard Promy center Kim Joo-sung praising his son, saying Ung was as popular as a K-pop idol.

That didn’t go over well with Hur Jae, who remains the only player to win the KBL Finals MVP award despite being on the losing team.

“Celebrity? He [Ung] should be a fighter,” the senior Hur said.

Despite their ambitions and impressive talents, Korean basketball insiders say that it will be very challenging for the Hur brothers to surpass their father’s reputation.

“Even after 200 years, there will be no player like Hur Jae in Korea,” Promy coach Kim Young-man said.

However, Hur Jae believes that his sons still have more room to grow - and Ung is well on his way to living up to his father’s reputation.

Q. What can you say about the results of the All-Star Game fan vote?

A. Ung: Well, I’m still puzzled about the result. I think fans rated me well since my skills have improved from last season.

Ung, have you ever watched any of your father’s performances?

Ung: I saw a video clip of the 1997-98 KBL championship series, during which my father played for Kia. I know he brought the series to Game 7 despite having a fractured wrist. Even though Kia finished runner-up, I know he won MVP. Since he is old, I think I can now beat him going 1-on-1 (laughs).

Jae: You know, I can beat you easily if I quit drinking and smoking and train for about 10 days. You should be careful because you might break your leg guarding me.

Jae, what can you say about your son playing for the Promy, which is also your former team?

Jae: Kim Joo-sung, who is 14 years younger than me, joined our team in 2002. Back then, I just told him to think of me as a brother. Now, Kim is playing with Ung, who is 14 years younger than him. I heard from Kim that he’d done the same thing for Ung, telling him that he’s a brother. When I was coaching the Egis last season, I could have picked Ung for my team, but I did not. If a father and son play for the same team, both would have had a tough time. He was lucky to be selected for the Promy as the fifth pick.

Ung is known for his hard work. Coach Kim said that he practices dribbling even in hotel rooms on the road. What can you say about this?

Jae: What? I think he purposely practiced next to the coach’s room (laughs).

Jae, your second son Hoon is also a basketball player at Yonsei University. What can you say about both of your sons following in your footsteps?

Jae: At first, I didn’t like them playing basketball, but since they love sports too much, I gave up. When both played for the Korean youth team, some people said that they were selected because they are the sons of Hur Jae. Those words were hurtful to me.

Jae, can you compare your two sons’ style of basketball?

Jae: Ung is quiet, but Hoon is like a rascal. Unlike me, both are right-handers. Ung is a shooting guard and collects points nicely like his coach Kim Young-man did in his playing days. Hoon is a point guard who likes to display aggressive plays. But both still have long ways to go.

How much of Ung’s basketball style is similar to yours, Jae?

Jae: Ung has consistency in shooting. Of course, he needs to work harder on his power and jumps.

Jae: Pretty? You should have called it ‘amazing.’

Many people say that your two sons have a long way to go to catch up to their father. What’s your opinion on these views?

Ung: In our team’s home stadium, I can see my father’s retired jersey. I feel how great a player my father was. I will work hard so that my jersey can also be hung up right next to his when I retire.

Jae: These days, people don’t call me ‘Basketball President’ but rather ‘Ung’s father.’ I’m a guy who is now on his way to being forgotten, but because of my son, I can now have this kind of interview. If my two sons have a better career than me, I’ll be really happy.