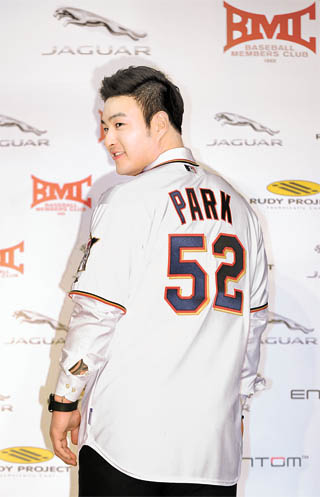 The Minnesota Twins’ Park Byung-ho shows his jersey during a press conference held in Seoul on Thursday. Park will depart to the United States for spring training next week. [NEWSIS]

Newly minted Minnesota Twins player Park Byung-ho said he expects strong competition from other Korean players in Major League Baseball (MLB) and hopes they can work together to boost Korean pride in the United States.

Park, 29, signed a four-year deal worth $12 million with the Twins last month. He held a press conference in Seoul on Thursday before going to the United States next week for spring training.

The Twins start their MLB season on April 5 (Korean time) against the Baltimore Orioles, which were recently joined by Korean outfielder Kim Hyun-soo. The 27-year-old outfielder signed a two-year contract worth $7 million with the Orioles last month after becoming a free agent from the Korean Series champion Doosan Bears.

“I felt good when I heard about the season opener and meeting with Kim Hyun-soo. I’m happy that we can play together with Korean pride. If my team asks about Kim’s weaknesses, I’ll answer that he has none,” Park said, laughing.

Park and Kim join existing Korean major leaguers - Ryu Hyun-jin of the Los Angeles Dodgers, Choo Shin-soo of the Texas Rangers and Kang Jung-ho of the Pittsburgh Pirates. Among them, Park, Kim and Choo are to meet frequently during the season, as their teams are in the American League.

Park, who is expected to play as a designated hitter for the Twins, said that he hopes their performance in the MLB could energize the Korean people and motivate other Korean players to aim for the big leagues.

“In Korea, since the major league games will be broadcast in the morning, I believe many people will watch the games,” he said. “Just like I began my day when I was a kid by watching Park Chan-ho’s games in the morning, Korean players and I will try to perform well so that our Korean fans can start their days nicely.”

Park, who made his pro debut with the LG Twins in the Korea Baseball Organization (KBO) in 2005, said that there isn’t a specific MLB team he wants to face, but he did mention the Los Angeles Dodgers’ CY Young Award-winning left-hander Clayton Kershaw.

“I had a lot of questions about Kershaw for Kang after he got a hit from him,” Park said. “Although I won’t face Kershaw [since he is in the National League], I want to see his pitches.”

Park’s former teammate Kang earned the nickname “King Kang” with the Pirates after his impressive rookie year performance. Park, who topped in home runs and RBIs in the KBO for the last four years, said he wants to be called “Park Bang,” a nickname which Korean fans have given him for his powerful batting.

The three-time KBO Golden Glove winner hinted that he may want to come back to the KBO before he retires to wrap up his career.

“If I am satisfied with my performance and have good results in the United States, I think it wouldn’t be a bad idea to return to Korea and wrap up my career,” he said. “Of course, the team that I’d join once I return is the Nexen Heroes.”