Many entertainers attended and were honored at year-end award ceremonies held in 2015 by terrestrial channels, including the MBC Drama Awards [JOONGANG ILBO]

The year-end award ceremonies for 2015 proved once again to be a letdown. While the country’s broadcasters patted themselves on the back for a job well done, boasting viewership ratings above 10 percent on Nielsen Korea, some of the ceremonies received criticism for being poorly structured.

The following is the JoongAng Ilbo’s roundup of some of the shows’ biggest peculiarities. 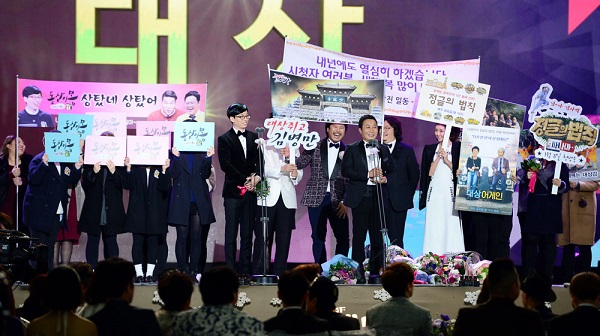 Many entertainers attended and were honored at year-end award ceremonies held in 2015 by terrestrial channels, including the SBS Entertainment Awards. [JOONGANG ILBO]

For its drama category, KBS divided its series into four categories: daily, medium-term, long-term and mini-series. Two actors were honored for each.

Some of the awards seemed unnecessary. The awards for Best Couple and Most Popular Performer were relatively understandable.

But Best Challenge and Best Entertainer? These honors were a bit vague, and it was questionable how they differed from the Outstanding or Best Actor/Actress awards. KBS even had a Hot Issue Entertainer award, which honored comedian Jung Hyung-don and UFC fighter Choo Sung-hoon.

Some win them all

Actress Hwang Jung-eum and actor Park Seo-jun were also honored across four different categories. So it’s almost surprising that actor Kim Soo-hyun of “The Producers” was only awarded in three categories.

Two winners for one award

The highest honor in most award shows went to two entertainers. Actor Kim Soo-hyun and actress Ko Du-shim won the highest honor at the KBS Drama Awards, and comedian Yoo Jae-suk and Kim Byung-man won the top award at the SBS Entertainment Awards.

It is good to see young stars hosting the ceremony - but they also ended up receiving multiple honors. The KBS Drama Awards presented three different awards to two of the emcees, including actress Kim So-hyun and actor Park Bo-gum. The MBC Entertainment Awards honored all three emcees, including comedian Kim Gu-ra, who won the highest honor.

The ceremonies ran too long

Three of the six award ceremonies by local terrestrial channels lasted more than an hour. But most of it was emcee banter - because there was not really that much to see. The longest ceremony was the SBS Drama Awards, which lasted for four hours and 13 minutes, ending at 1 a.m. on New Year’s Day.

Some of the entertainers who took on impressive roles this year weren’t even honored at all. Actresses Kim Hee-ae of “Mrs. Cop” and Soo Ae of “Mask” were nowhere to be found at the SBS Drama Awards, and neither was Baek Jong-won, a standout among stars on the endless list of cooking programs.