Korea’s Jindo dogs are facing a crisis at home

Korea’s Jindo dogs are facing a crisis at home 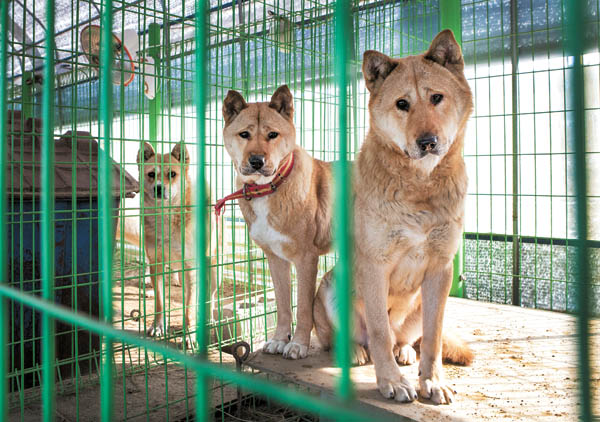 These Jindo dogs rescued from a chicken farm where they were fed only sick and dead chickens and kept in a filthy cage are awaiting adoption. [PARK SANG-MOON]


Twenty stray dogs, which looked to be Jindo dogs, were confined in a chicken farm for about a year in a rusted cage and fed only sick and dead chickens.

The dogs didn’t get enough food or water and were covered in their own feces and urine, recalled Oh Jin-ok of Ilsan, Gyeonggi, who came across the dogs one day by chance. She started going back to feed them and clean the cage, until the farm owner began threatening to sell dogs at a dog-meat market.

She immediately sought help online. Oh raised 8 million won ($6,700), and used 5 million to pay the farm owner for the dogs. With the remaining money she built a special house for the dogs and has since been trying to find adoptive homes for them here and overseas.

So far two have been adopted by families in the United States and Canada and two by local families, and she hopes to find new homes for the rest by August. 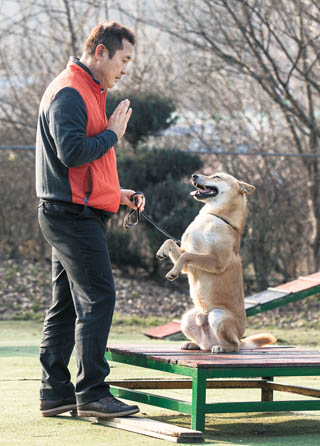 The sight of Jindo dogs living in such poor conditions is not uncommon in Korea. Traditionally the indigenous breed was kept outside and treated like livestock, and in the modern era where dogs are considered pets, many find Jindos to be difficult and unsuitable for urban life.

While the government has designated Jindo dogs as a natural monument and is trying to create an industry around the breed, in reality countless Jindos are being abandoned across Korea. And in place of export of the breed, the dogs that do end up abroad are mostly rescued strays.

There are no statistics on the number of stray Jindo dogs in Korea, but animal rescue workers and canine experts here say that Jindos are the dog breed most frequently found in shelters. Oh, who has been volunteering to rescue dogs for years, speculates there may be up to 100,000 Jindos without homes in the country.

At Empathy for Life, one of the largest online groups here dedicated to dog rescue, staff members regularly update online lists of dogs that will soon be put to sleep.

There were 15 dogs on the list of soon-to-be-euthanized large dogs posted in November, and 11 of them were either pure Jindo dogs or mixed-breed Jindos.

“Around 80 to 90 percent of stray large dogs are either Jindo or mixed-breed Jindo,” said Kang Gyung-mi, a representative of Empathy for Life.

The reason is simple: The population of Jindo dogs is large to begin with. There were 11,345 of the dogs in Jindo County as of July last year, according to the county, and the number of Jindos elsewhere in Korea is speculated to be up to 300,000.

Another reason for the large number of stray and shelter Jindos is dog owners’ lack of understanding of the importance of neutering their dogs.

Jindo dogs, named after the island where they were originally bred, are commonly known for their loyalty and tenacity. They are loved by many dog owners, but they are also considered a difficult breed. Their loyalty also means they may not be so receptive to new owners. Some even say Jindos are too violent and even known to attack their adoptive owners.

Many prospective owners seem to fall for their cute looks and decide to get a dog, without understanding the responsibilities that come with dog ownership, according to Park Jae-young, who runs an online community. Korjindo, which roughly translates to Korea Jindo Dog Gathering, provides tips on living with Jindo dogs. Park has owned many Jindos and even trained one to be in dog shows.

“When the dogs turn 8 months to 12 months, that’s when many dogs seem to be abandoned,” said Park. “They are fully grown by then, and the owners start to feel more burdened and see more of their temperamental side.”

But there are few warnings for aspiring dog owners. Most of the information available is not about these realities but only about the breed’s good traits.

Kim Ji-eun from Chicago, who bought a Jindo from Korea as her first dog about two and a half years ago, recalled that it wasn’t easy to get detailed information about the breed. She studied and prepared herself to train the dog better, but said that she can see why some people get overwhelmed and regret their decision.

“Since I was young, I was always informed of all the remarkable stories that praise the Jindo, so I didn’t know that the breed is considered one of the toughest ones to train,” said Kim, who is now the owner of three Jindo dogs and volunteers to help find new homes for Jindos in the United States and elsewhere.

But the breed’s aggressive temperament has also caused some vets to refuse to examine them, especially at small clinics. Their large size makes them difficult to subdue.

“At least four to five people need to be holding the dog down for any check-up, and smaller clinics with two or three staff members would of course face difficulties,” said Kang Jong-il, president of Choonghyun Animal Hospital in Seoul.

No matter how well-bred a Jindo is, when it is not properly trained, its continual barking may become a nuisance.

“If the owners can’t control their dogs, some bring them in to euthanize them,” Kang recalled.

And while most keep their smaller dogs inside, Jindos are usually kept outside on a leash, since they are often used as guard dogs, especially in the countryside.

“If a dog is tied to a leash most of the time, it has much less time to interact with humans,” said Oh from Ilsan.

Prof. Lee Jae-il of Chonnam National University’s Department of Veterinary Medicine also noted that keeping a dog on a leash makes it more violent and stressed.

“Since they can only reach certain areas on a leash, they start to think that they are the main power at least in that area and become more protective of what they consider theirs,” he said.

Furthermore, Jindos tend to run away if they don’t establish strong ties with new adoptive owners.

Hence, many rescuers in Korea attempt to find adoptive owners overseas, where the dogs have a higher chance of being kept indoors and more in contact with humans.

Many believe that Jindos are hard to tame when they’re older, so it is extremely hard to find new homes for fully grown Jindos in Korea. This is another reason many dog rescuers try to find them homes abroad.

Maureen Delaney, who founded the dog rescue organization Delaney’s Dog in California, has brought over five dogs from Korea for adoption in the United States. So far, she has found homes for four.

“Every breed has the right people, and not every person is right for every breed,” said Delaney, adding that she has never gotten any request to return any of the Jindos she found homes for.

“Make sure to give your Jindo lots of mental stimulation as they are very intelligent and can get easily bored without things to do or a routine,” she added.

These days there are several such groups in the United States working to find homes for Jindo dogs. Treasured K9s in New York and Two Dog Farms in California both specialize in rescuing Jindos in the U.S.

Treasured K9s, which began work in 2008, has placed approximately 75 Jindos into homes, while Two Dog Farms rescues up to 60 dogs annually and finds new homes for most. Both groups said they haven’t seen a decline in the number of Jindo dogs in need of rescue.

And according to Rosalind Behenna, founder and director of Two Dog Farms, there is an increasing interest in adopting Jindo dogs from Korea these days, which might be attributable to increasing awareness of dog-meat markets in Korea.

Jacintha Sayed, a dog rescuer based in Seattle, also works to give the dogs better lives in the United States.

“Personally, I think the breed is wonderful and deserves to be given a better chance at life than perishing in a meat market,” Sayed said. “When the dogs arrive here in Seattle, they seem to know they are on their way to a better life and you can see in their eyes that they are grateful.”

“Sending dogs over is shameful and definitely not something to be proud of,” Kang of Empathy for Life said. “But we can’t send them to people who only want to raise them to make quick cash from selling them in the dog-meat market [in Korea].”

Lee Woong-jong of the Esac Animal Companion training center emphasizes that dogs, especially Jindos, need to be properly trained so they can be more social.

“They are very sensitive to changes in their surroundings,” Lee said, adding that it’s best to train them before they turn 5 months old.

He is currently training 40 Jindo dogs for owners in Korea at his training center in Hwaseong, Gyeonggi. These dogs learn not only to follow orders, but also to fight their natural attack-prone instinct when they sense danger. They are also trained to get along with other dogs.

Owners leave their dogs at the center for three to six months and come see them whenever they want. The center also provides training to the owners.

“Not all owners know about the characteristics of their own dogs, so it is important for them to hear what we find,” Lee said, adding that training is the key to preventing abandonment.

The training program at his center costs about 660,000 won a month.

While the export of Korea’s indigenous breed has been happening through these rescue efforts, the Korean government has not done much to create a global market for dogs with good pedigrees.

Kang of Choonghyun Animal Hospital argues that if the breed is problematic, there should be studies to find ways to make them more desirable. She suggests making Jindos more friendly by encouraging research on breeding those with a calmer temperament.

“Because each dog has its own characteristics, we can try to find the positive aspects and make that characteristic stand out after generations of breeding,” she explained.

“We might be stuck in the idea that ‘Jindos should be like Jindos,’ which might fail to fit to this generation’s needs for pets,” she continued. “If we want to have people feel more comfortable and familiar with Jindos, we might need to consider giving them what they are looking for.”

However, some are more skeptical about the move to promote the breed abroad.

“Globalizing Jindos at the moment seems impossible as there are not enough studies on the detailed traits of the Jindo dog yet,” said Yoon Hee-bon, author of “Our Jindo Dog.”

“We need to know the good and bad traits of our dogs to come up with appropriate marketing strategies, and there’s little the government can do here, unless ordinary people try to appreciate the too-abundant Jindo.”

Also, some say the brand value has not been successfully proven in the wider global communities.

“To be able to export and make an industry with the Jindo, we need to put effort into making foreign pet-lovers desire the breed,” said Yun Il-sub, chief of the judging committee of the Korea Kennel Club. “We need to prove the value of the dog, and it is uncertain when we can have such proof.”

Although the government tried to fund efforts to make the breed better known in the international community, the project funding to a team led by Professor Lee of Chonnam National University stopped in 2013.

Lee is now trying to focus on promoting Jindos as special-purpose working dogs that can detect cancer cells in the human body.