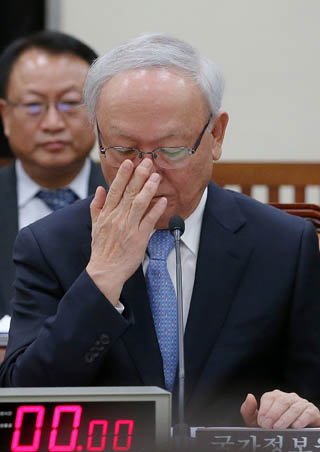 Lee Byung-ho, the director of the National Intelligence Service, adjusts his glasses at a National Assembly Intelligence Committee meeting Wednesday night. Lee admitted that the country’s main spy agency had failed to spot the signs that North Korea was preparing for a nuclear test. [NEWSIS]

Lawmakers on Thursday berated the Park Geun-hye administration for its failure to detect North Korea’s latest nuclear test in advance.

Lee Byung-ho, the director of the National Intelligence Service (NIS), admitted that the country’s main spy agency had failed to notice the signs that North Korea was preparing for the nuclear test.

The admission was made during an emergency briefing to the National Intelligence Committee in the National Assembly on Wednesday evening, hours after Pyongyang made an announcement earlier that day claiming to have detonated its first hydrogen bomb.

After a seismic event was detected in North Korea around 10:30 a.m. Wednesday, Pyongyang officially announced at 12:30 p.m. that it successfully conducted a hydrogen bomb test. “Lee admitted during the briefing that the NIS had been defeated,” said Rep. Kim Kwang-jin, an opposition Minjoo Party lawmaker on the committee. “It was a battle between the hider and the seeker, and Lee acknowledged that we were defeated this time.”

As the remark prompted a controversy, Rep. Lee Cheol-woo, a ruling Saenuri Party member on the committee, told MBC radio that Lee had chosen inappropriate wording. “He was saying that the NIS didn’t know about the timing of the test and he was feeling regretful about it,” the lawmaker said in an attempt to defend the NIS.

The lawmaker added that the NIS as well as intelligence agencies worldwide had been in the dark.

Minister of National Defense Han Min-koo also admitted that the military became aware of the test only after the North had carried it out. “I learned about it a little past 11 a.m. on Wednesday,” Han told the National Defense Committee.

“There was no unusual movement near the nuclear test site until 10 minutes before detonation,” a senior Defense Ministry official told the JoongAng Ilbo on condition of anonymity.

Han said there had been sporadic movements of personnel and vehicles near the nuclear site’s underground tunnel, and that the military did not believe a test was imminent. Ahead of North Korea’s three previous nuclear tests, the site had been evacuated, allowing the outside world to infer an event was imminent.

While the Park administration tried to defend its intelligence gaffes, both the ruling and opposition parties denounced the government for having neglected obvious signs.

“That was our response because experts assessed that the North has not reached the technology level of creating a hydrogen bomb,” Han said in response.

The Minjoo Party subsequently brought up the fact that the Defense Ministry had assured the National Assembly in September that the military had the ability to detect a nuclear test about a month in advance - which Han claimed was just a general statement.