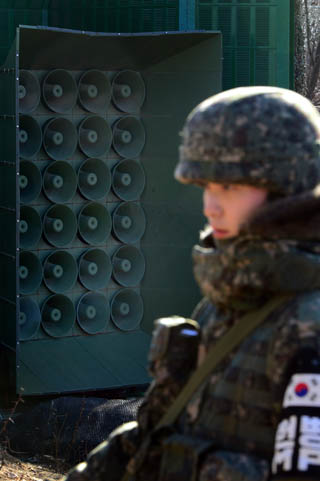 A South Korean soldier stands Friday in front of a loudspeaker at the inter-Korean border in northern Gyeonggi. The South Korean military resumed previously suspended propaganda broadcasts toward the North at noon on Friday in response to North Korea’s fourth nuclear test. [NEWSIS]

South Korea resumed propaganda broadcasts at the border on Friday, putting an end to 136 days of silence, to punish Pyongyang for carrying out a fourth nuclear test this week.

The speakers, which blast K-pop songs and announcements critical of the North Korean regime, had been switched off after a compromise was reached between both sides at the end of August to put a rest to rising tensions. The resumption of the broadcasts, a form of psychological warfare, fell on the same day North Korean leader Kim Jong-un celebrated his birthday.

The South Korean military vowed harsh retaliation in the event of a military provocation from Pyongyang.

The loudspeaker campaign was resumed at noon Friday and announced by the South Korean government as a punitive measure against Pyongyang for carrying out a fourth nuclear test.

North Korea claimed on Wednesday that it had detonated its first hydrogen bomb.

The move was a clear violation of the six-point inter-Korean agreement struck on Aug. 25, in which the South promised to pull the plug on the broadcasts as long as there was no “unusual activity” from Pyongyang.

An official from the Ministry of National Defense told reporters that the speakers were turned on across 11 frontline locations; six vehicles equipped with loudspeakers were also mobilized.

The source, who spoke on the condition of anonymity given the sensitivity of the issue, said the broadcasts include songs from K-pop groups like Big Bang, GFriend and Apink.

Broadcasts will be played two to six hours daily at varying times.

The military also played news reports critical of the regime and its fourth nuclear test and which expose the human rights violations perpetuated by the regime.

The military, however, said it would not mock Kim Jong-un.

“The North Korean soldiers must have heard the broadcasts today,” the official said.

The resumption of the propaganda campaign is expected to raise tensions on the peninsula.

South Korea previously restarted broadcasts in August in response to land mine explosions inside the demilitarized zone that maimed two South Korean soldiers.

The North subsequently fired shells across the border, gave Seoul 48 hours to turn the speakers off and declared a quasi-state of war.

The feud was put to a rest in the early morning of Aug. 25, following 43 hours of marathon talks that resulted in a six-point agreement outlined at the border village of Panmunjom.

As of press time on Friday, the North had not responded to the resumption of the broadcasts,; it remains to be seen whether it may resort to military action, or fire warning shots like last year.

“The resumption of broadcasts could unnerve the North, which is already paranoid about outside criticism against its supreme leader, which could in turn prompt it to raise tensions even higher than they were last year,” said Cheong Seong-chang, a senior fellow at the Sejong Institute, a policy think tank.

Mindful of the possibility of military strikes across the border, units near the broadcast areas were on highest alert Friday, ready to fire at any time. “We have detected signs of an increase in the number of North Korean troops at some border units, which have amped up surveillance activity,” a government official said. “We are keeping a close eye on the North Korean Army’s movements.”

Jeong Joon-hee, a spokesman for the Ministry of Unification, added Friday that the government “is not, at this point, considering shutting down the Kaesong industrial park,” the only remaining joint enterprise between North and South Korea.

“I don’t think we should mention words such as ‘closure’ and ‘withdrawal’ at the current stage,” he said.

When asked what the North could do for the South to halt its loudspeaker campaign, Jeong said that the government had not yet considered it.