Students brave cold for a cause

Students brave cold for a cause 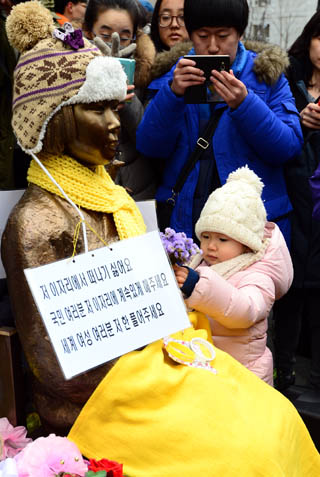 A child examines the Peace Monument during the weekly Wednesday rally this week across from the Japanese Embassy in Jongno District, central Seoul. [NEWSIS]

It was a frosty winter night and temperatures had plummeted below zero degrees Celsius when a group of college students gathered near the symbolic bronze statue erected across from the Japanese Embassy.

One by one as they crawled out from their transparent vinyl tents near midnight, they took turns singing along with the rhythmic melodies of a guitar, belting out lyrics from Lee Moon-se’s “Girl” (1985).

“As I sit by the window at sunset, I see the clouds floating far away. I draw out the old memories I yearn for. You cry in the cold wind feeling lonely, but I will always stay by your side. I will not leave you.”

The five students were part of an ongoing rotation of volunteers on Wednesday who set out to stage a 24-hour sit-in in front of the Japanese Embassy in Jongno District, central Seoul. Their goal was to “protect” the statue from being removed or relocated, which authorities had earlier hinted was a possibility.

The Peace Monument, also known as the Pyeonghwabi, is a life-size statue of a teenage girl in traditional attire that represents tens of thousands of women and girls - from Korea and other colonies - who were forced into sexual slavery by the Imperial Japanese Army during World War II.

Euphemistically, the victims are referred to as “comfort women.”

“I’m so cold I feel like my body is about to tear apart,” one of the five students moaned, as they wrapped up their late-night demonstration, which lasted for two and a half hours.

Tightly clenching their portable hand warmers, the group crept back into their sleeping bags, lined along the Peace Monument as if trying to fend off any intruders.

Since the statue was set up on Dec. 14, 2011, by a public fund-raising project, the Japanese government has pressed for its removal, asserting it is a violation of the Vienna Convention’s requirement that diplomatic missions be protected from any disturbance of the peace of the mission.

For Korean activists, it was a channel to publicize Japan’s wartime atrocities, with 30 other similarly designed Peace Monuments erected nationwide and three more overseas.

But Seoul finally backed down last week when it told Tokyo it would “acknowledge” Japan’s concerns over the monument and “negotiate with relevant organizations on how to deal with the issue.”

It was a clear message that the monument could be removed anytime.

When reporters from the JoongAng Ilbo visited the scene that day to conduct a 24-hour field report, some 50 police officers were dispatched near the monument, which sits just one narrow street away from the Japanese Embassy’s main building.

“I feel just the same as these students,” one police officer said, sighing, as he anxiously eyed the students curled up in their makeshift shelters. “I, too, am a Korean citizen and I equally wish to protect this monument. It just disturbs me to see all these students camping out in this freezing weather.”

By 7 a.m., the students were wide awake, their bodies stiff from the brisk winds. It was finally time to switch shifts, and a new group of 10 college students arrived to spend what would later be a tumultuous day, the 24th anniversary of a weekly rally condemning Tokyo and its reluctance to take legal responsibility for the comfort women issue.

“The kids who spent the night here will go home, take a shower and eat up,” said one 23-year-old who wished to only be identified by her surname, Hwang. “We don’t have a strict order as to who comes when. We just take turns protecting the Peace Monument.”

As the clock struck noon, the time the 1,212th Wednesday rally began, hundreds of people swarmed Peace Street, calling out for the cancellation of the agreement made between Seoul and Tokyo on Dec. 28 that promised an official apology from the Japanese government as well as a state-backed fund for the victims amounting to 1 billion yen ($8.4 million).

Some 800 police officers were dispatched nearby.

Scores of people dropped by the monument to take photographs, as little children asked their parents why the girl’s feet were bare. They did not know it signifies the victims’ feelings of loss.

By 2 p.m., as the rally was nearing its end, a large yellow sheet was set off on the right side of the monument, on which passersby wrote personal messages to the surviving victims.

“We will never forget your pain,” wrote Baek Jeong-mi, 28.

Later that day, Park Deok-han, 45, arrived at the row of tents with five boxes of snacks and handed them out to the college campaigners to lend his support.

“I was watching the news and decided to come out,” he said. “As an adult, I just feel sorry for these kids.”

By 7 p.m., a candlelight vigil led by another student group had begun, though this one attracted some 100 people from the local community. The demonstration lasted two hours as people read poems and statements calling for Seoul to scrap its deal with Japan.

At 9 p.m., the students who would spend the rest of the night by the statue began to install electric generators. They said that a couple of lawmakers had convinced police to allow the students to use electric heating mats to chase away the cold.

When the clock struck midnight, the new group was ready to tuck themselves in and plastered their bodies with hand warmers. Their hair disheveled, it was only their smiles that seemed to brighten the dark empty street.

“We’re going to call it a day now!” one student called out to the reporter. “Go warm yourself up!”